And so it begins again, having finally got everything 'flight ready' as we slowly hobbled to Pollington lock we're having a week aboard as a shake down cruise as we head to Keadby. Then it's a week back home doing final family things before heading to the Chesterfield canal for two weeks. 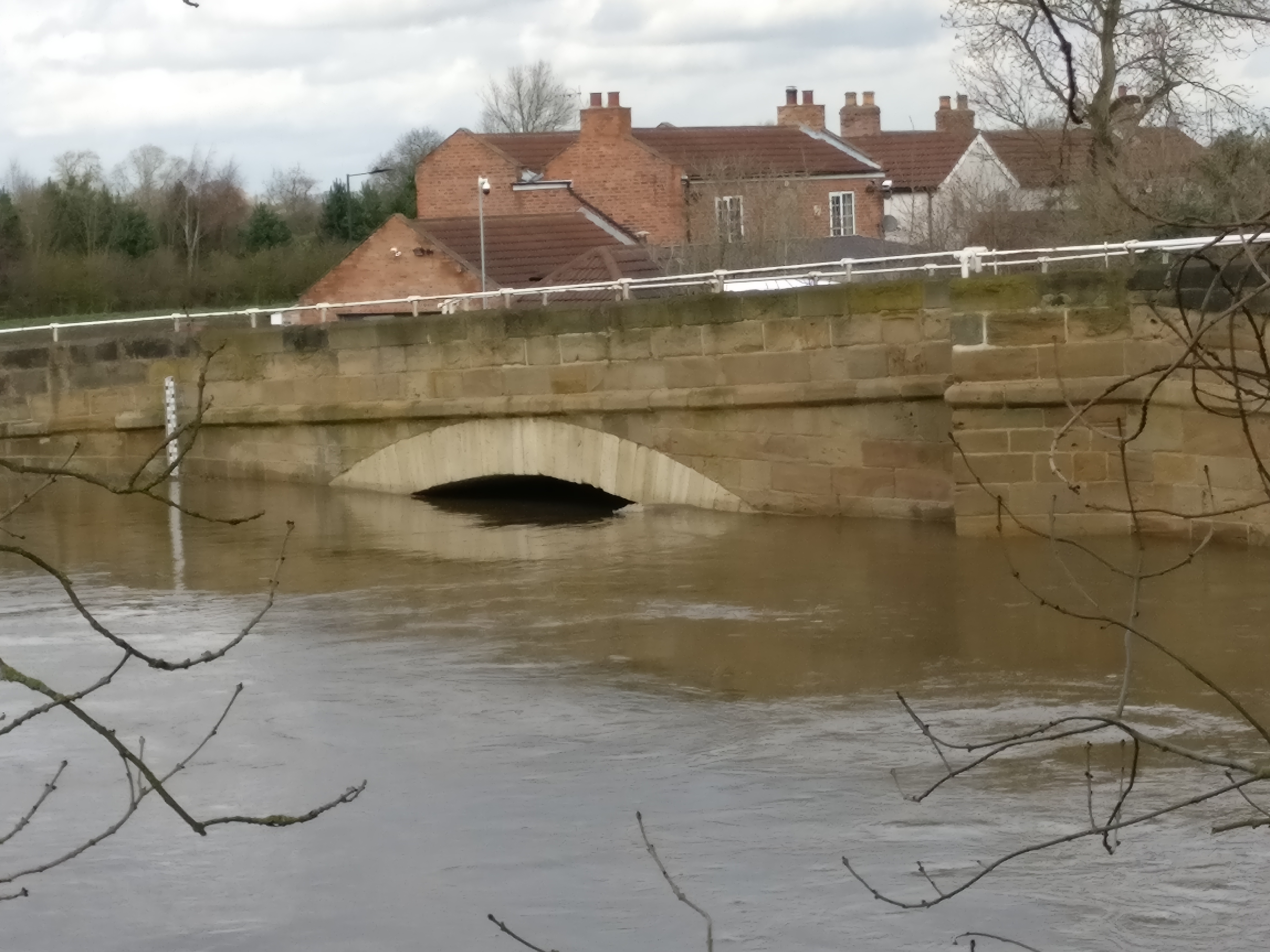 So the rain continues, the river Don at Stainforth bridge almost over topping into the canal, a slightly nervy night! 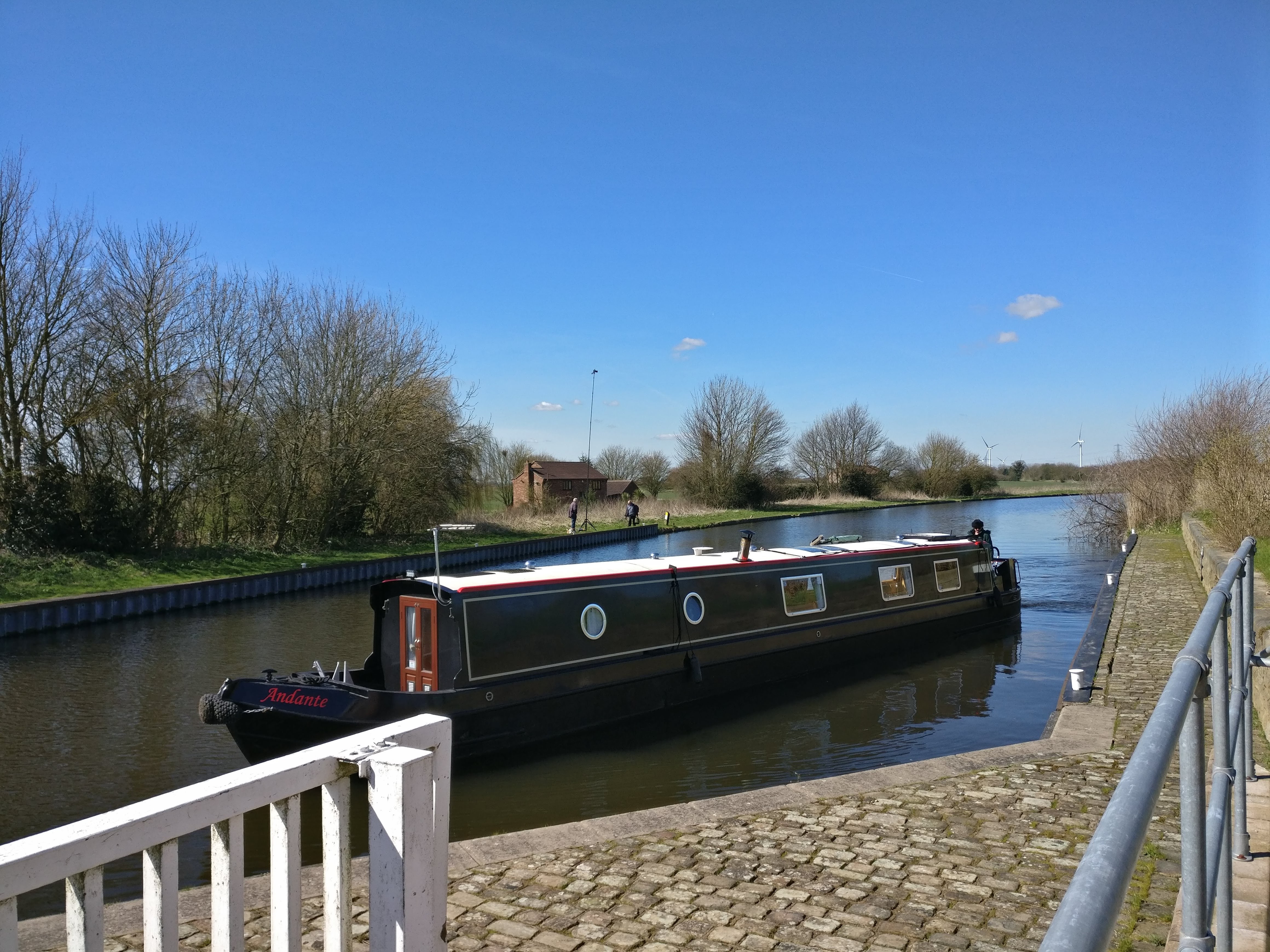 Notice the train spotters in the background with the world's highest tripod! Mauds bridge I think.

Exiting the lock into a spring tide has us doing 6 knots with no effort, at this rate will be there by 7!

Well 7am arrives and we're..... Nowhere near!!?? It seems there's a considerable amount of 'fresh' coming down so whereas we'd normally have the tide behind us for the full 2 hour journey 30 minutes in and we're battling the current, 1500 revs, 1800 revs, still only making 2 knots, push the throttle wide open, 2000 revs were all-in!! Now making about as much progress as we do on a canal at tick over. I radio ahead to West Stockwith to advise him of our delay; ETA 9:30, 3 hours! As we approach the lock the river is running about 4 knots so it's game on. Bring her slowly up to the lock, crab across, aim high, lockie indicates keep coming to me so more power, keep the faith, surely I'm going to hit the top wall? Better turn now! Full power! Too soon! Believe the lockie! Clipped the bottom wall but all things considered not a bad effort and I think the lockie forgave me. Apparently the river was so high the tide never made it that far that day and everyone was tied up waiting for the river to go down so they could move. I just hope it's all calmed down in two weeks when we venture further up stream. 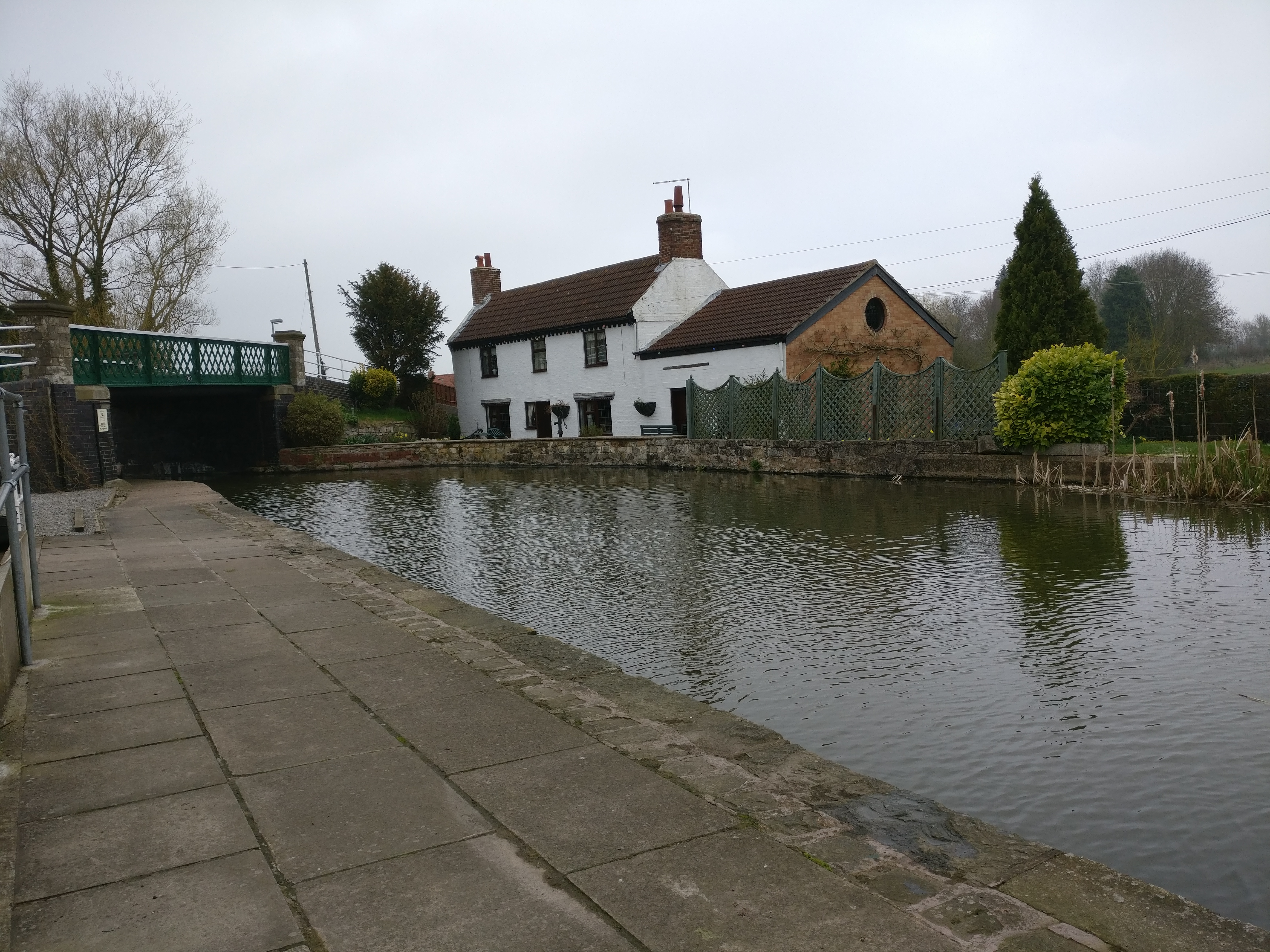 Clayworth Bridge (noted for its similarity to ascertain tower in Piza) A quiet mooring about 1 mile past Clayworth.

Tied up above Retford town lock to watch what turned out to quite a thrilling F1 race in China. Decided that Sunday was an excellent day to checkout the shops in Retford so had a mosey around, looks like there are a few nice bars and restaurants to try out while SWMBO goes shopping! 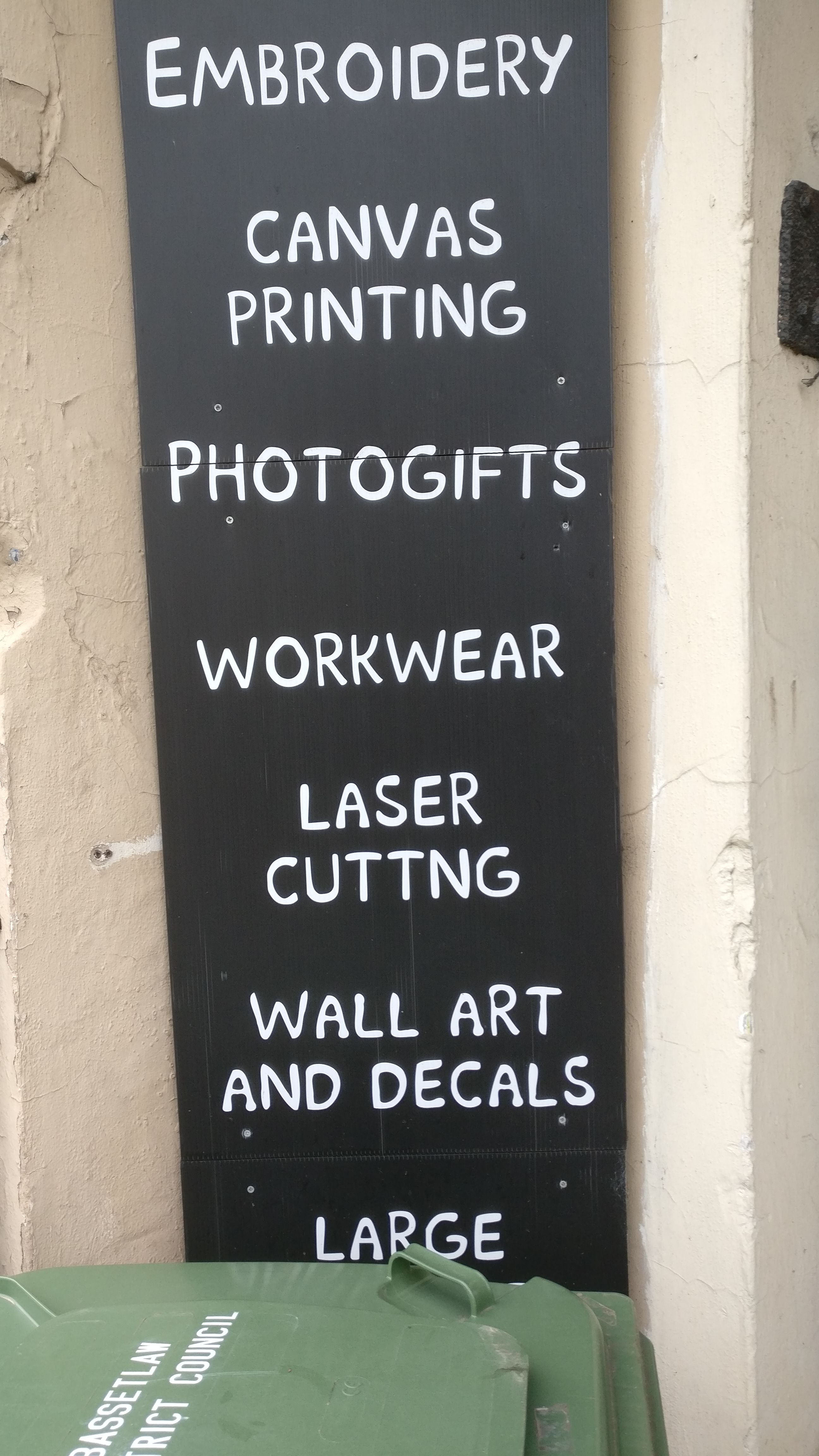 Obviously very creative but not great at spelling!!

On our return three youths were messing around with the lock gate and because I had the audacity to actually look at them I got the finger and a string of abuse. From the protection of a hedge they then started hurling stones at us, however thanks to fast food and computer games they didn't have the strength to get any nearer than six feet with anything worthwhile. So Retford, you  have privilege of being only the second place we've been 'attacked' in seven years!

Leaving the boat tomorrow with slight trepidation as I have a hospital appointment, Tuesday forcasts high winds so me may be here two days.

Survived the local artillery squad overnight so amongst other things we're picking up the third member of our crew today. 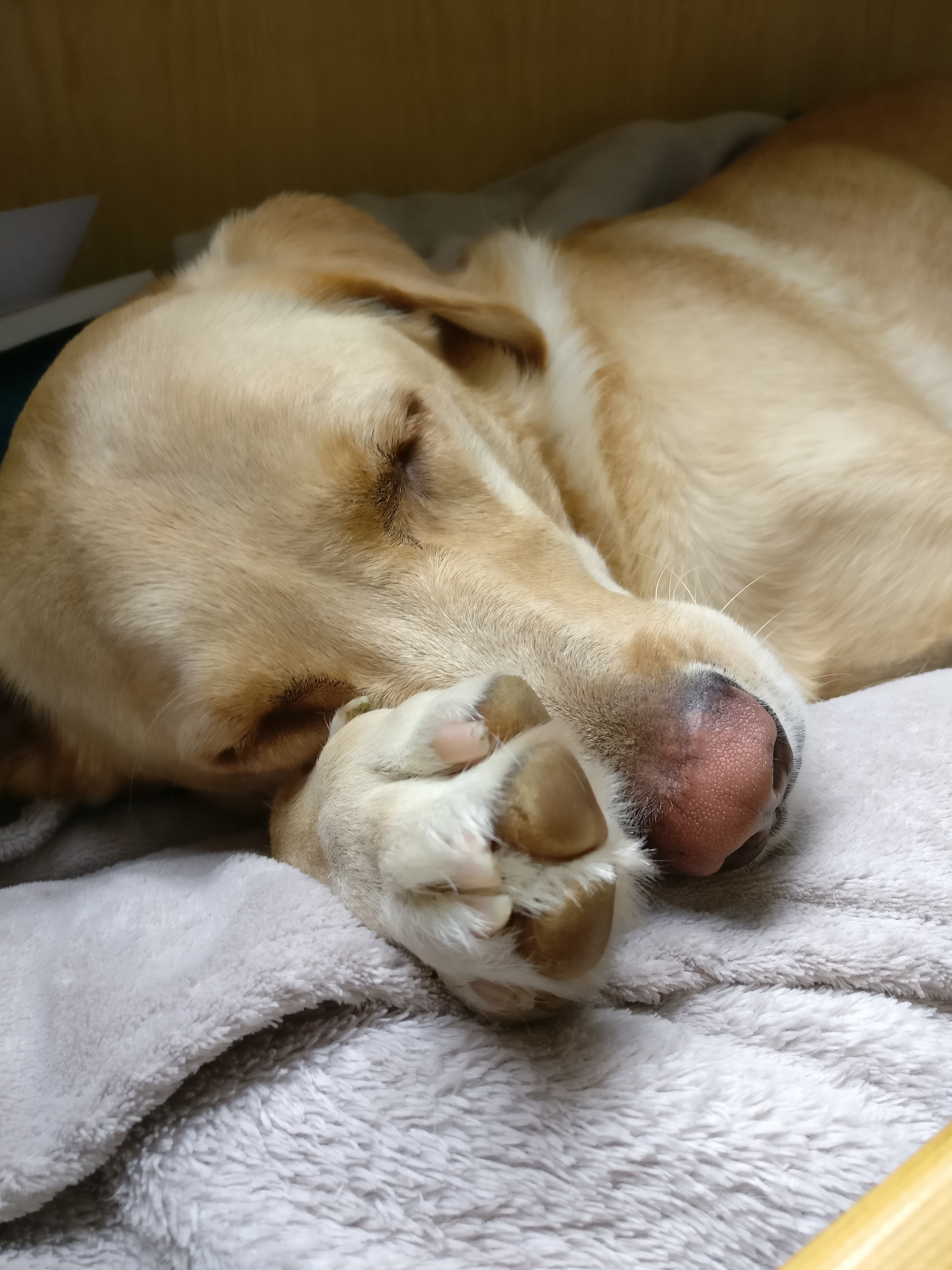 Obviously tired out by the journey! 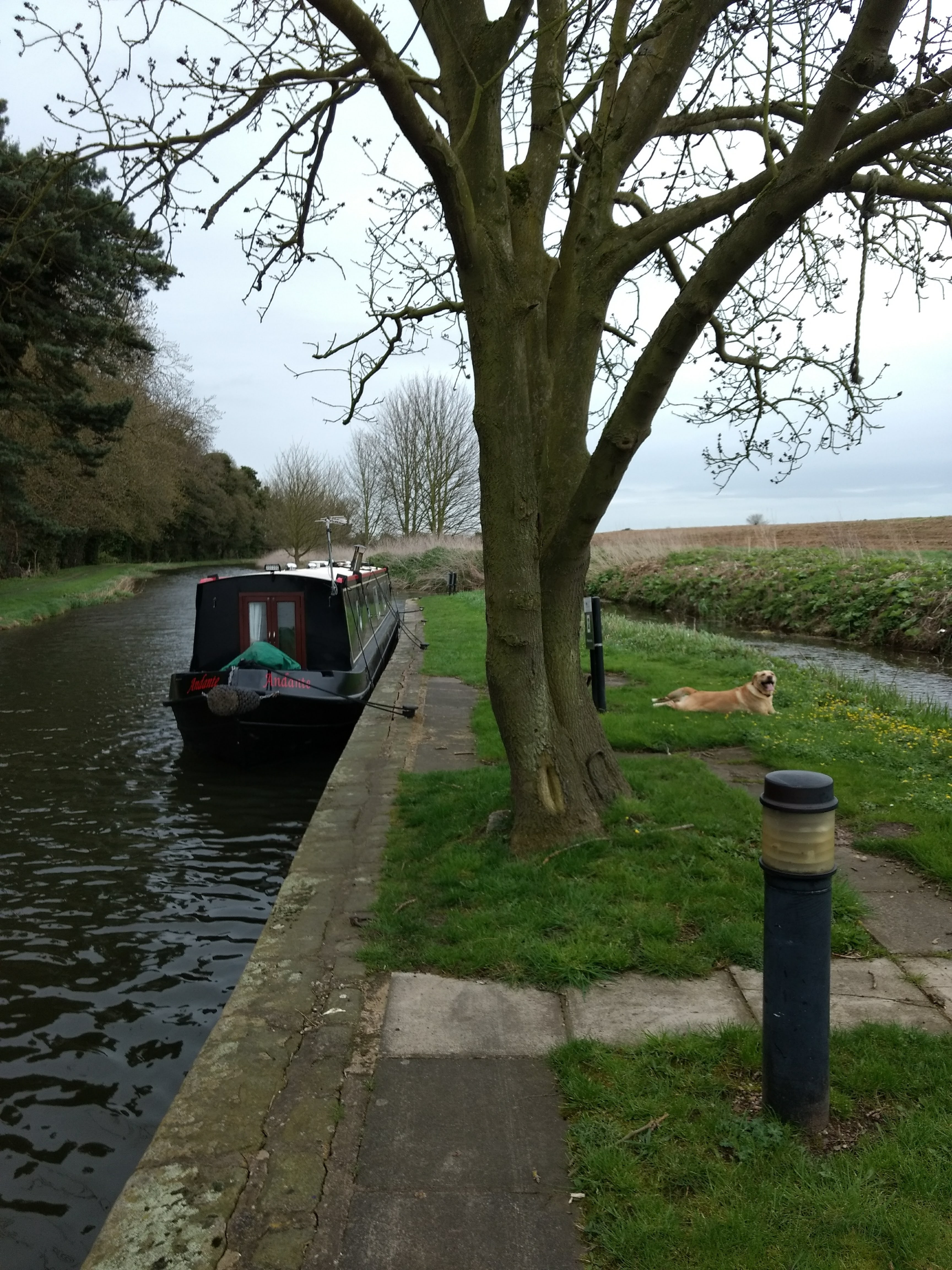 Tied up for the day at Forest middle top lock due to strong winds, but a lovely place to stop. Just enough room for one boat at the end of some long term mooring.  Molly is enjoying playing and walking in the woods opposite. Onward to Worksop for a bit of shopping and the collection of a much needed bit of electronics to fix our IT system. 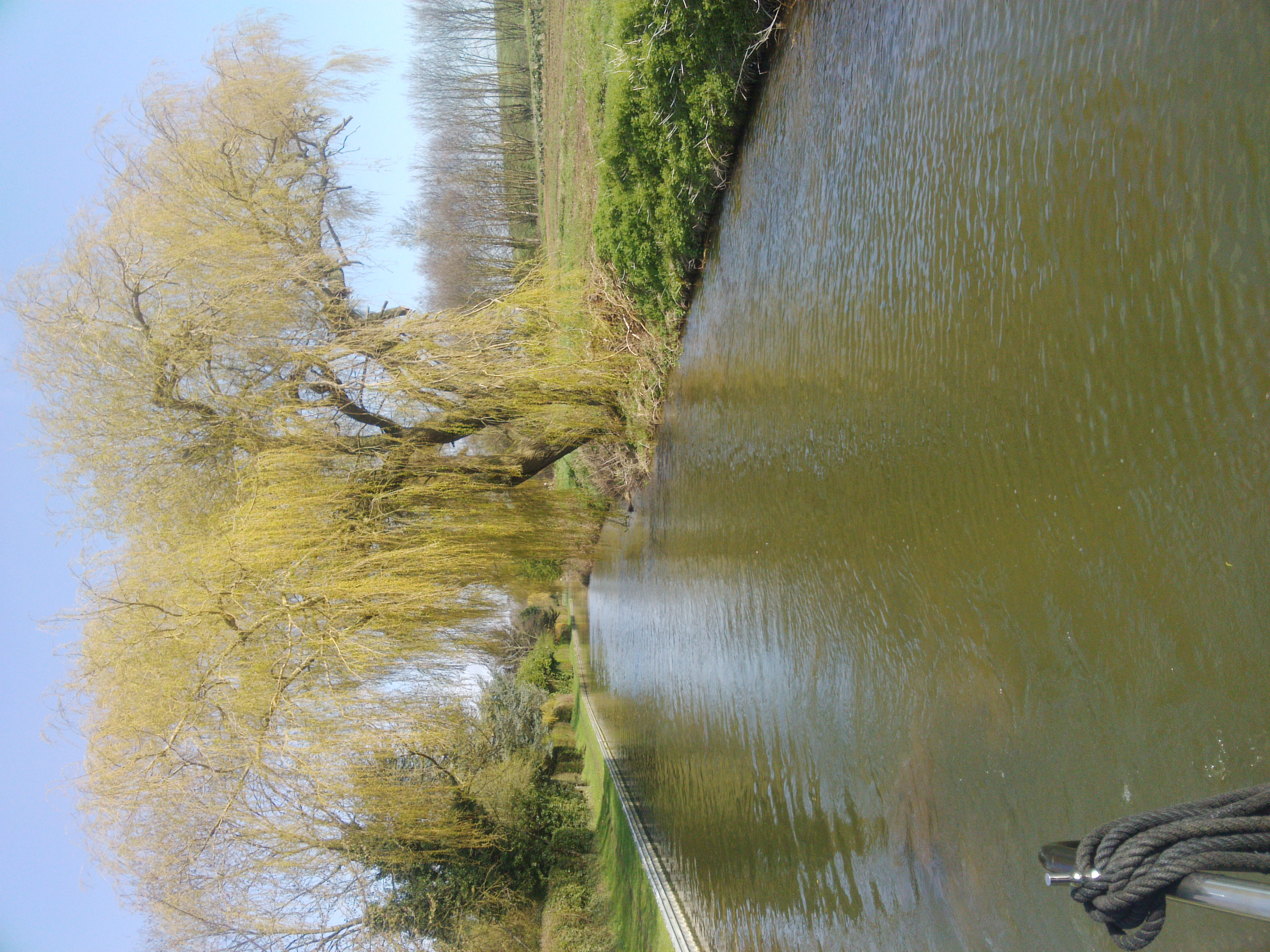 Past lots of Weeping willows. 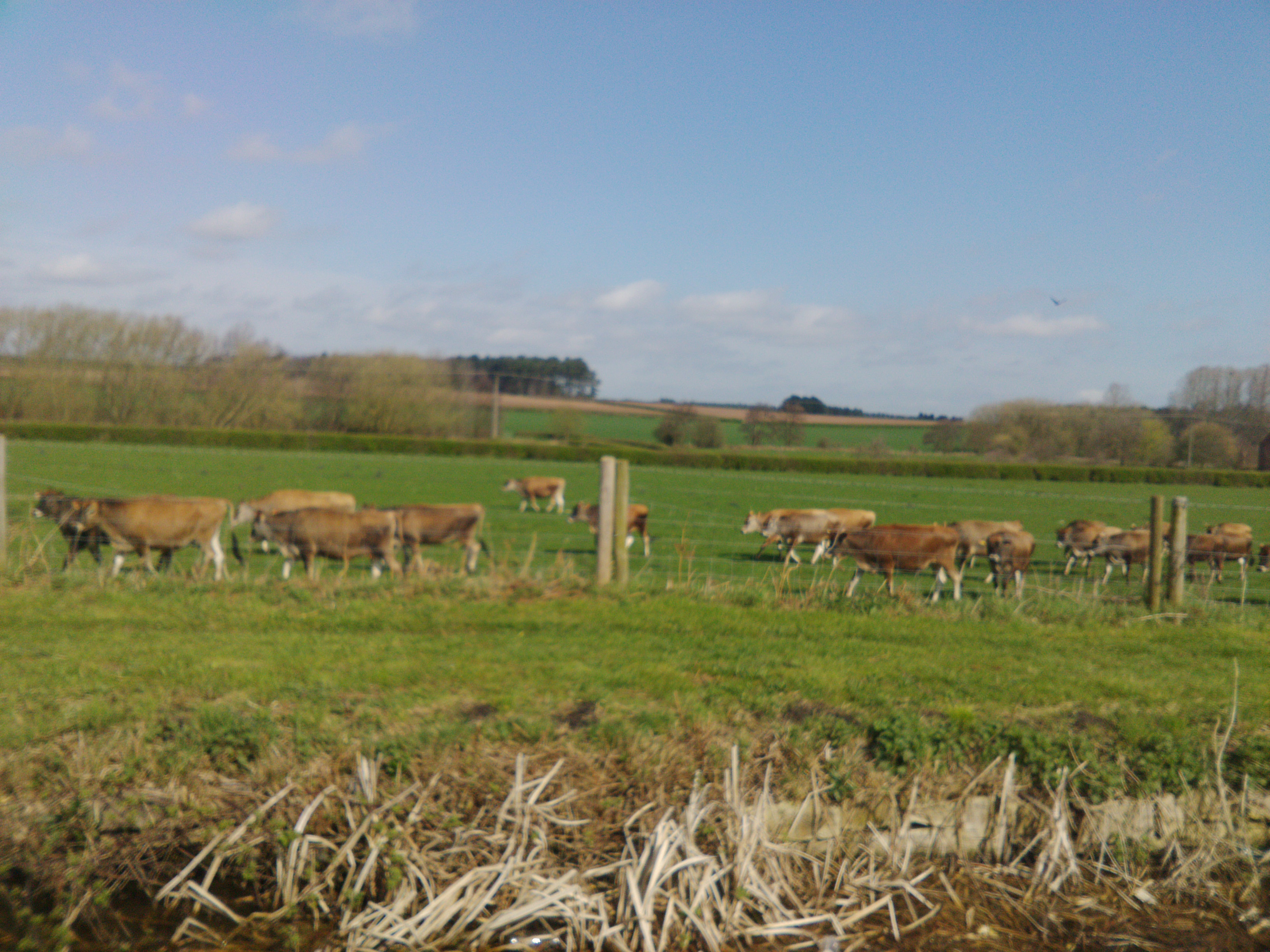 We moored on the outskirts of Worksop outside a pub called The Lockkeeper It was ok with a Sainsbury's close by but a bit noisy from passing traffic.

Today we headed for the top of the canal or at least as far as you can go presently. 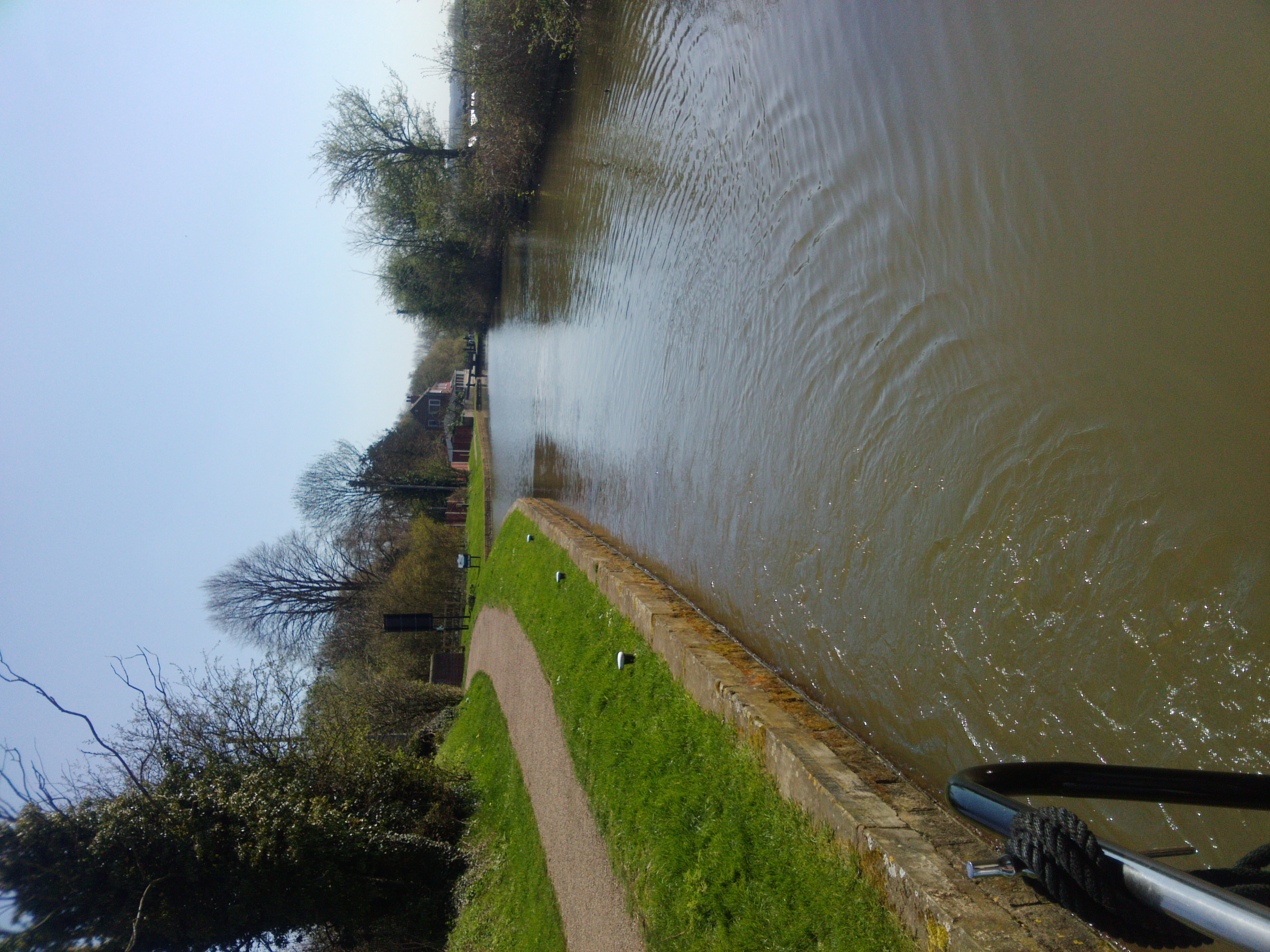 We stopped at a pleasant mooring at Shire oaks to recharge our batteries for the flight of 23 locks. This  flight  has been described as magical and it certainly is a beautiful place. Half way at Turner wood basin. 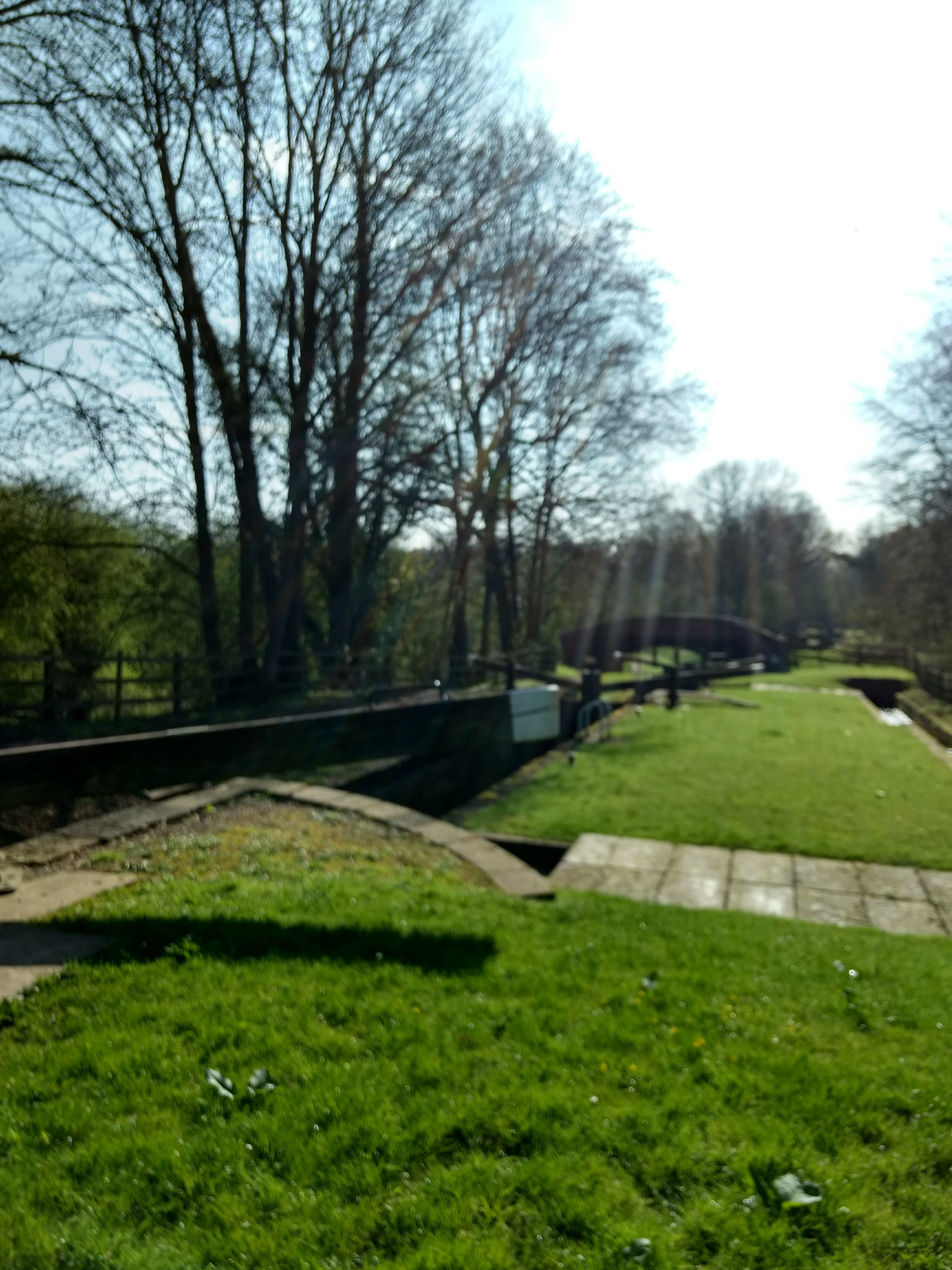 The final triple lock had a very low bridge. Just to add to the fun.

Finally arrived at the top at 6.40 pm. It had taken us about 4 and a half hours to complete the flight. 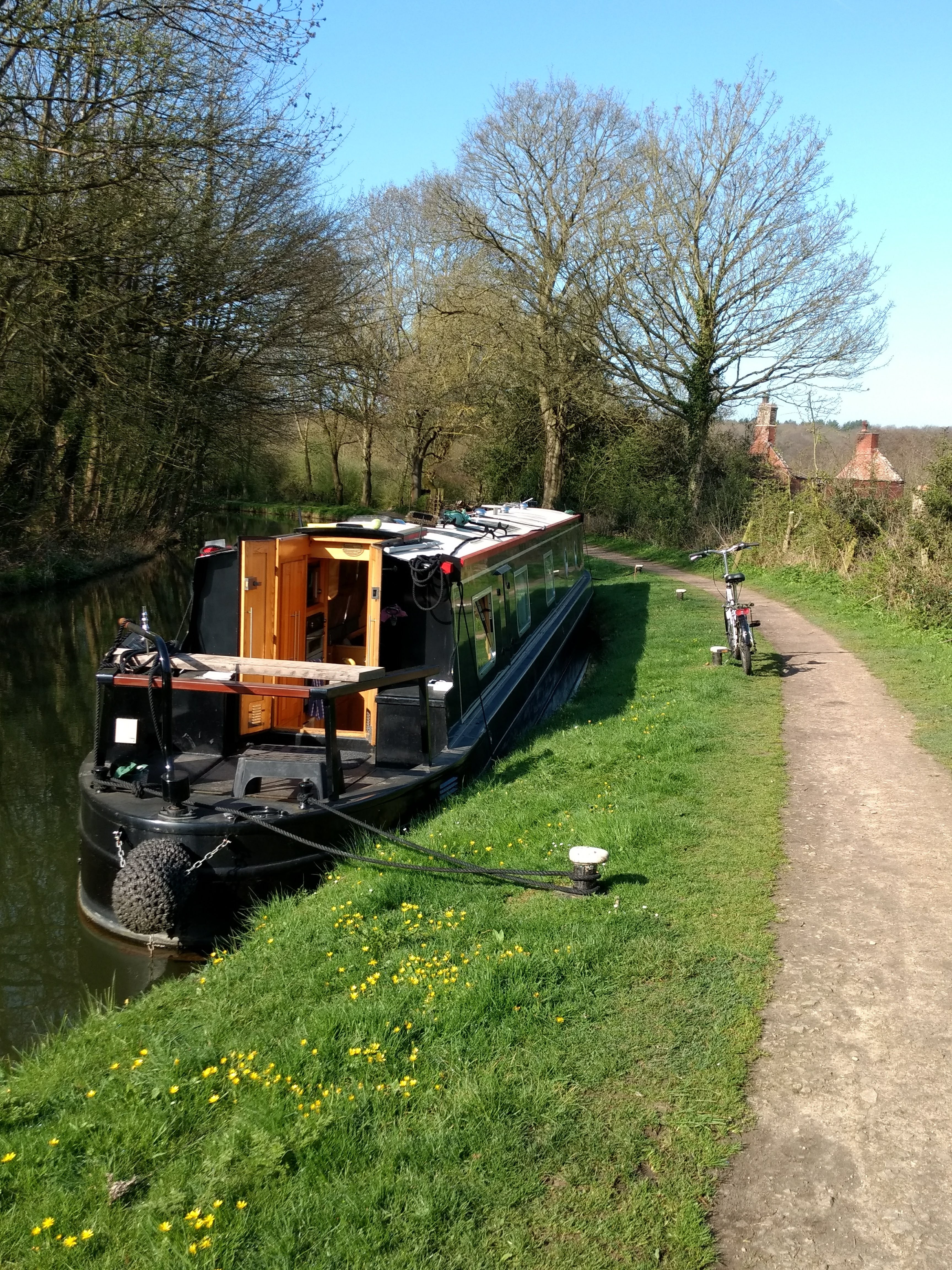 A quieter day today, a short trip up to the head of the canal to see the bricked up tunnel mouth and the source of the water. Due to all the recnt rain the visiror moorings at the head are muddy and mossy and not really useable so we've returned to last nights mooring fo the rest of the day and will set off down the locks tomorrow. 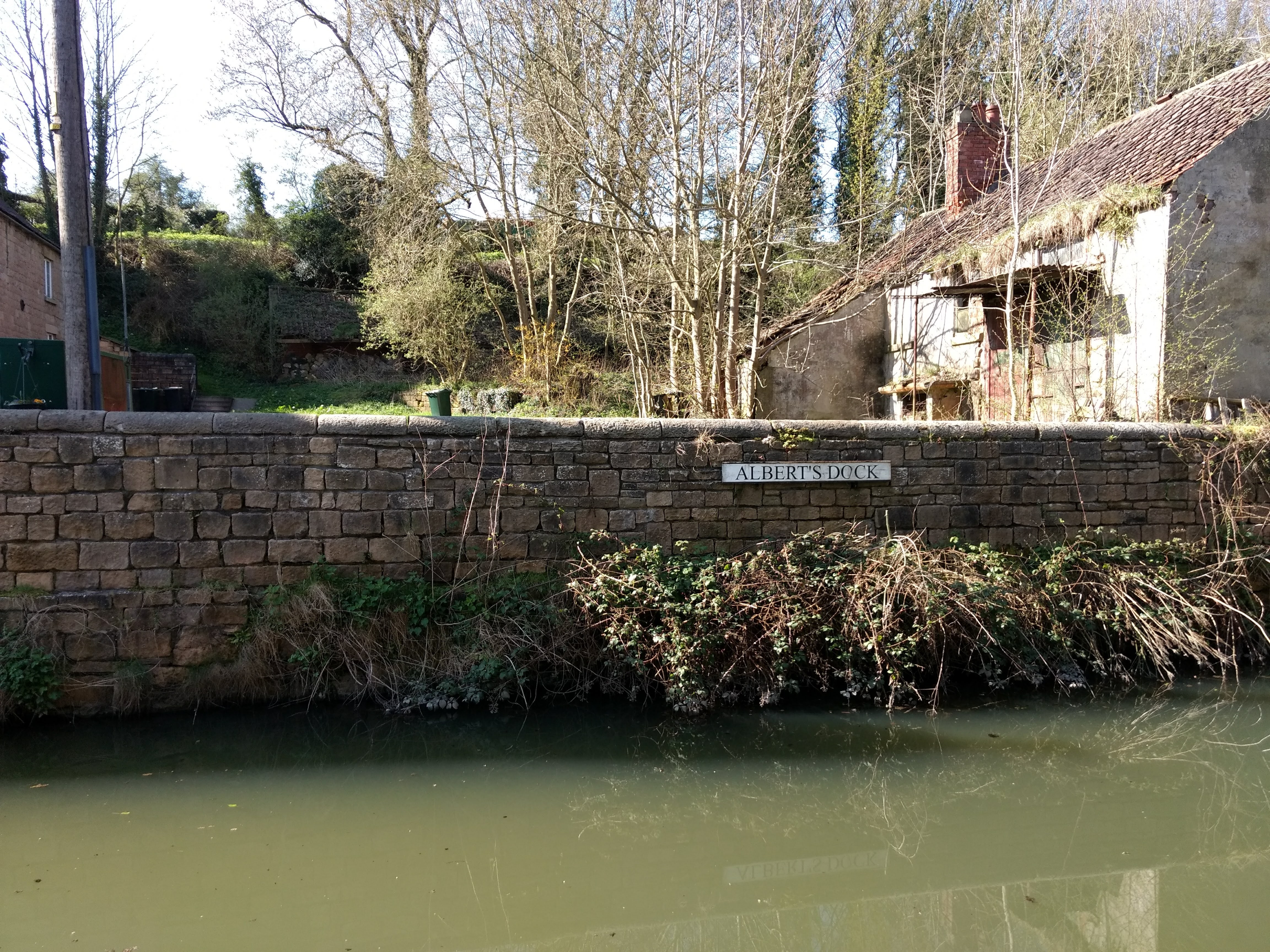 We passed the wharf where stone for the rebuilding of the Houses of Parliament in 1834 was loaded onto barges to be taken down  the canal to West Stockwith. From there it went down the river Trent to Goole where it was loaded on to sea going vessels and taken down the coast and up the Thames to London. The end of the canal is a bit disappointing.  The only thing of interest there was the number of fish that were clearly visible from the canal bank.

Sat relaxing and we get adopted by a cute dog who just came up to me, jumped on my knee and settled down! She stayed with us about an hour, guess she was trying out boat life.

It's very quiet on the Chesterfield. We've only seen 2 boats since leaving Retford 5 days ago and one of those was a trip boat; he tried opening the bottom paddle as we were coming in at the top and was shocked to see another boat moving! 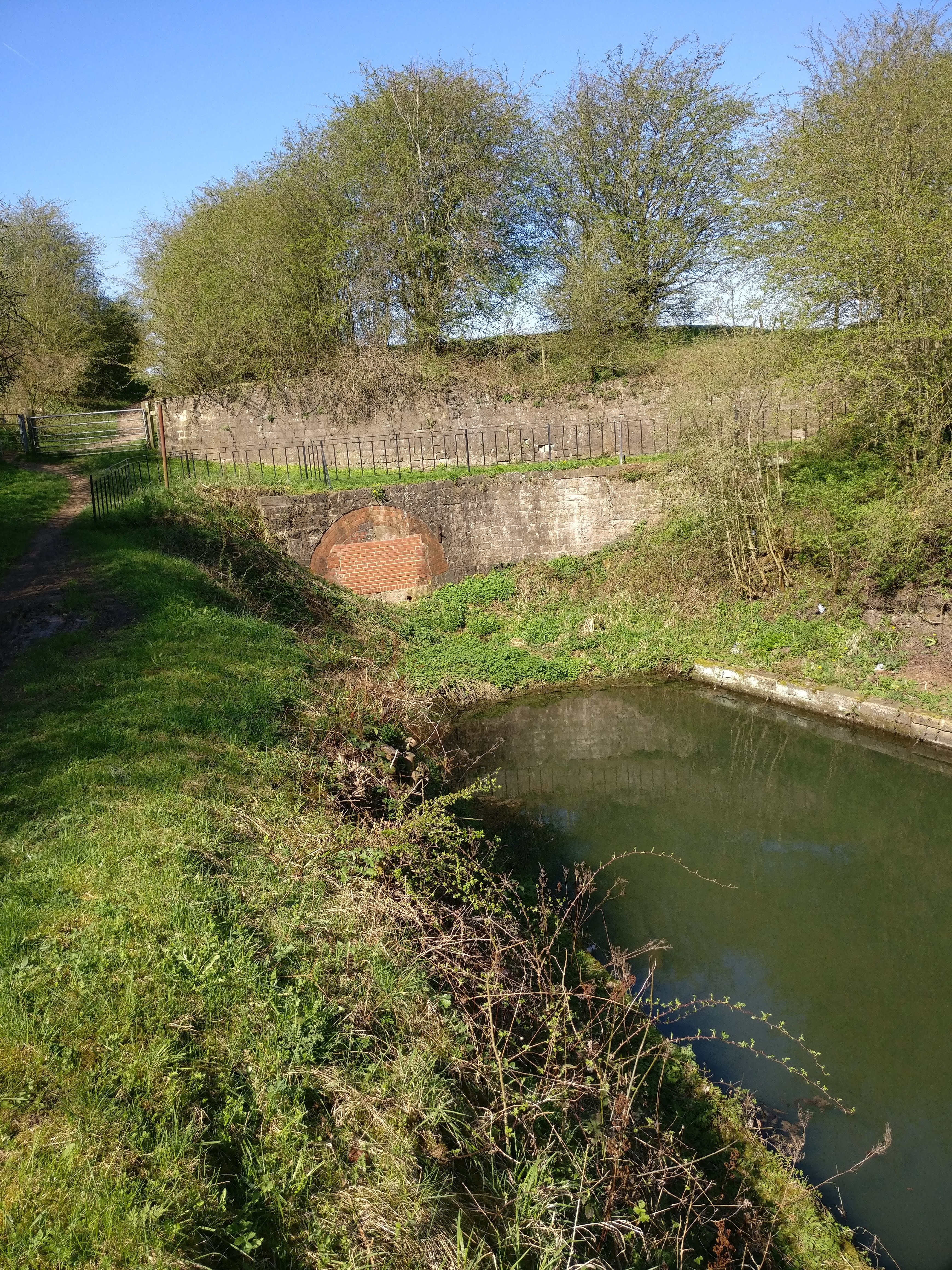 (Brian's blog) We finally reach the current limit of navigation, the bricked up tunnel. Whether or not it was due to the recent rainfall I don't know but the final mooring just before here is a muddy mossy mess. Impossible to tie up without getting the ropes and yourself covered in  mud and slime. Molly (the dog) came back onboard leaving muddy paw prints everywhere. I think CRT could put some basic drainage in to divert the top water off the moorings. (Rant over).

Turning around in a slightly tricky winding hole...

...we proceed to retrace our steps back to West Stockwith. Descending the top lock. The Chesterfield is a mix of broad locks at the bottom end but from Retford upwards they are narrow, very narrow. Morse lock in particular is very narrow towards the bottom of the lock close to the top gate, we had about 1/2 inch clearance. Take care too through the various 'narrows' that abound here too the steerer will need to be alive to avoid hitting the sides with only 6 inches or so of clearance through some. Oh yes and don't forget the low bridges, only just enough room to get out of here, our top rail clears the bridge by just one inch! (Anne mentioned this on the way up I believe.) It's clear from the missing chunk of stone others weren't so lucky. Another boater on the way up confessed he'd lost four chimneys to the Chesterfield, so clear your roof and take your chimney off until you get back to the basin. The swans at least have decided spring is in the air, there lots of nests around. One swan chased us off after we had passed, it was actually quiet unnerving looking backwards to see a swan coming straight at you, 12 inches off the water, 10 yards out and gaining rapidly. Fortunately he gave up before he got to us. 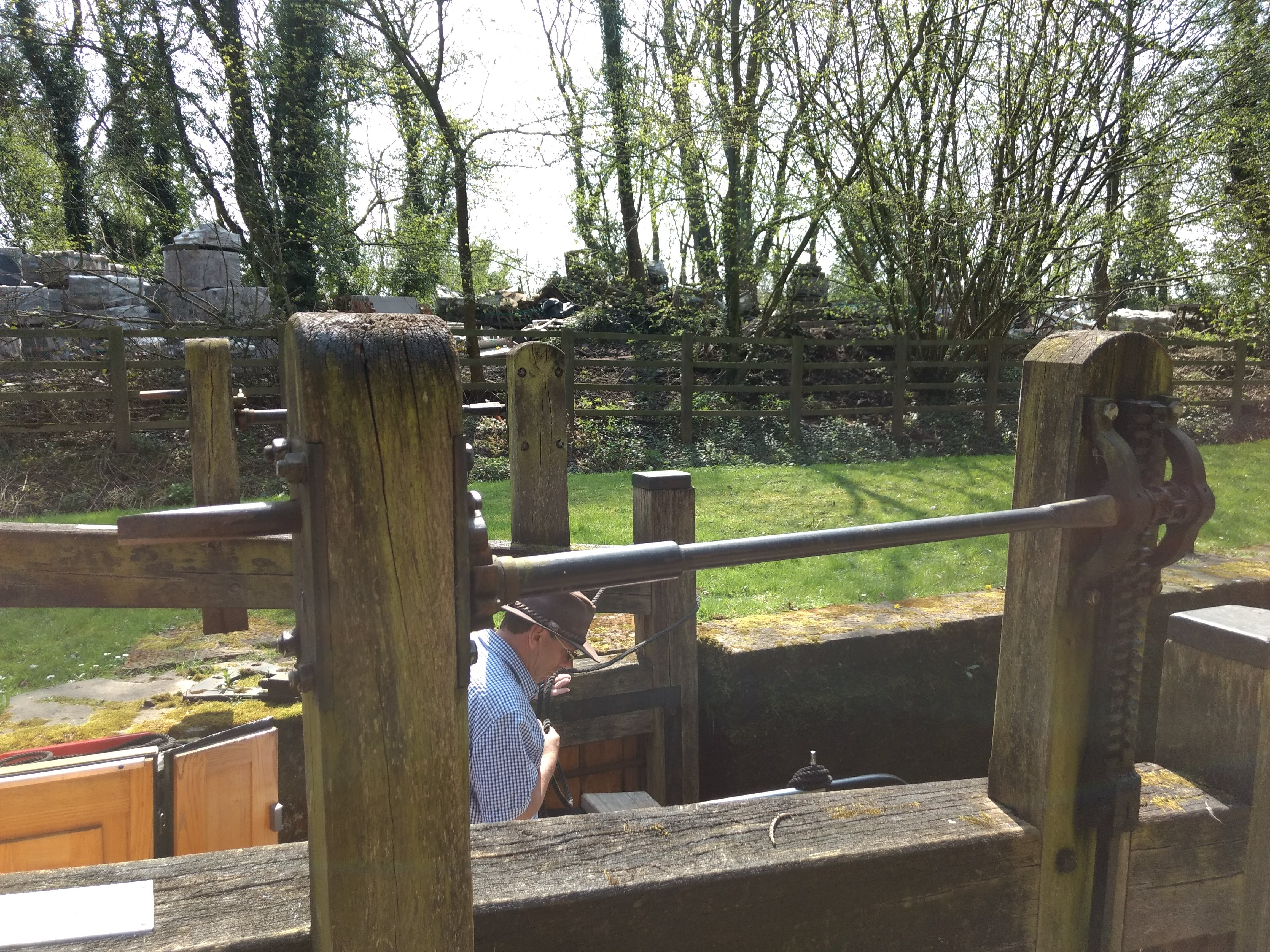 Skipper using old Chinese rope trick to close bottom gates to save SWMBO having to come back. Sometimes it even worked! Typical of the scenery above Worksop, not a boat in sight and now showing the signs of spring in the trees at last.

And then we made our way through the urban landscape of Worksop. One young man demonstrated how some locals use the canal as a toilet. But there were pleasant individuals as well including a man in his eighties who insisted on helping us through a lock. And another chap came out of a pub to chat to me. He told me he had a Labrador and a cat and explained, "The dog loves the cat, the cat loves the dog and I love them both!"

So what did we think of the Chesterfield having returned to complete the journey to the top after our abbreviated trip last year?

The Chesterfield isn't a canal to rush along, mostly because due to the weeds and general shallowness you simply can't, anyway why would you? Allow 30% more time to get about than your usual speed and you'll be about right. Our trip was admittedly early in the season but aside from pairing up with 'Stockit light' on day one through the first few double locks we really saw almost no boats on the move at all, one encounter with the trip boat emptying our lock and one single hander who tied up with us one night travelling the other way at Forest lock visitor moorings is all we encountered.

You would be well advised to moor only where indicated, elsewhere the edges are mostly very shallow and you'd be mooring 3ft from the bank. Diesel is only available in West Stockwith basin from Mick (07905 704657) who seems to be very accomodating regarding opening times and sells at a reasonable rate. Sanitary & water points are scattered adequately along the length though shopping becomes more difficult the farther up you go, Retford is convenient to Aldi and Asda, Worksop has the worst Morrisons i've ever been in though a little farther on you'll find what looks like a large Sainsbury's but is actually an inverse Tardis insofar as it seems much smaller on the inside.

Glossary: SWMBO Rumpole of the Bailey reference 'She Who Must Be Obeyed'