The first thing you learn is that the tidal part of the river Thames, that is downstream of Teddington, is that it is known as 'The Tideway' not the tidal Thames. If I have learnt anything whilst 'On The Thames' it is that one must get ones nomenclature correct lest one appears to be an ignoramus. Last year we met a lady of a certain age on a boat throwing ropes from the boat around bollards instead of getting off, she said 'I haven't spent years on the Thames without learning to throw ropes' and it became our somewhat derogatory catch phrase from then on, however having been here we too have learnt this essential art as The Environment Agency (EA) insist on bow and stern ropes in locks (as well as turning off your engine) and when ascending you have to toss your rope up onto the bollards, I suspect that the lock keepers secretly laugh at the antics of some boat crews that seem to lack basic boating skills. 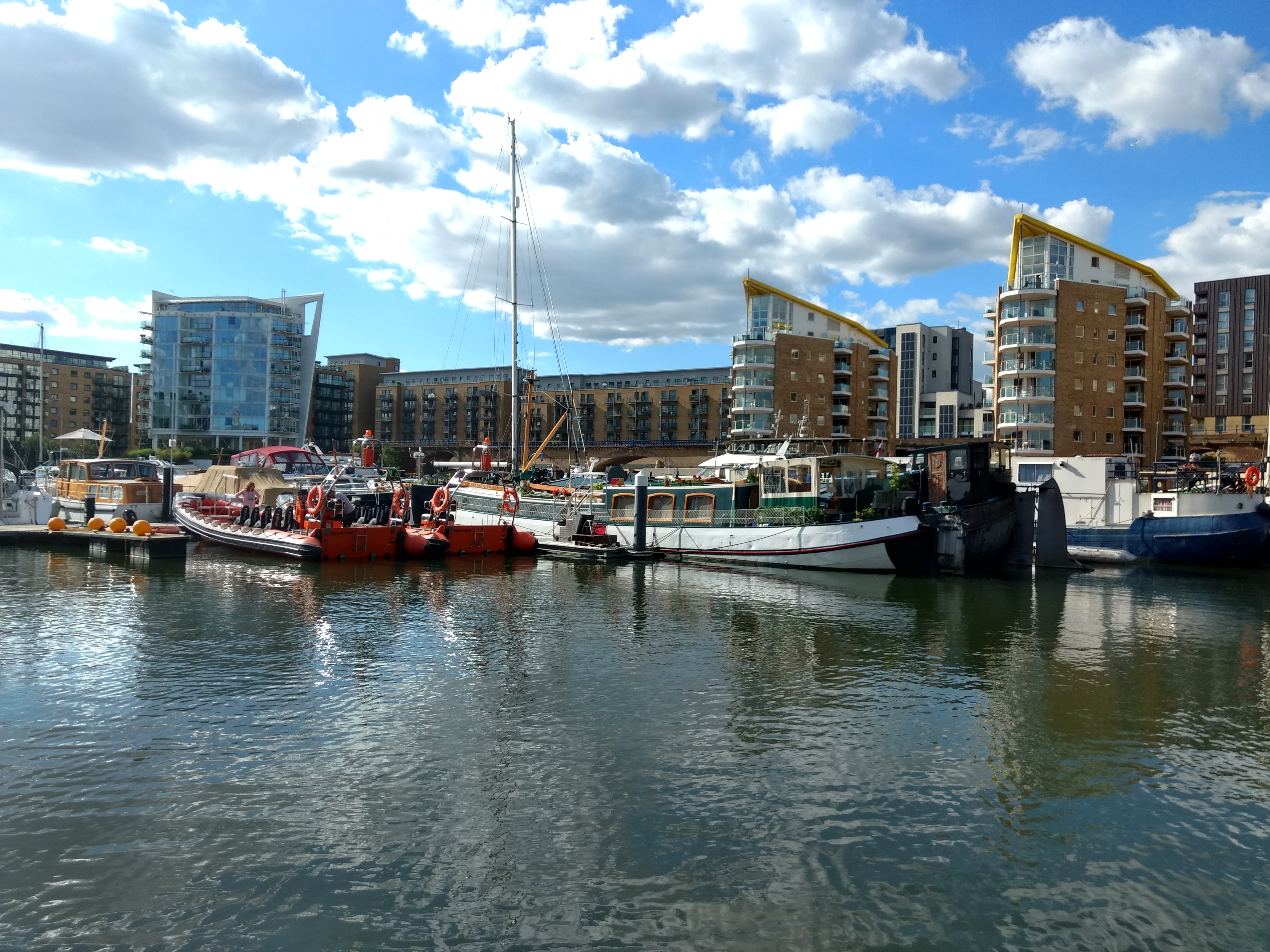 The Trip: We arrived at Limehouse basin mid afternoon and acquainted ourselves with our buddies for the following day, Neil and Chris on NB Comfortably Numb with their elderly dog Leila.  Neil informed us that he had enlisted the services of Simon from the St Pancras Cruising club as 'pilot' for the day so I decided that we should let the experts lead and we would tag along behind. Simon gave us a short briefing on things to watch out for from a safety angle before, at 6:15 precisely, we were cast into 'The Tideway'. 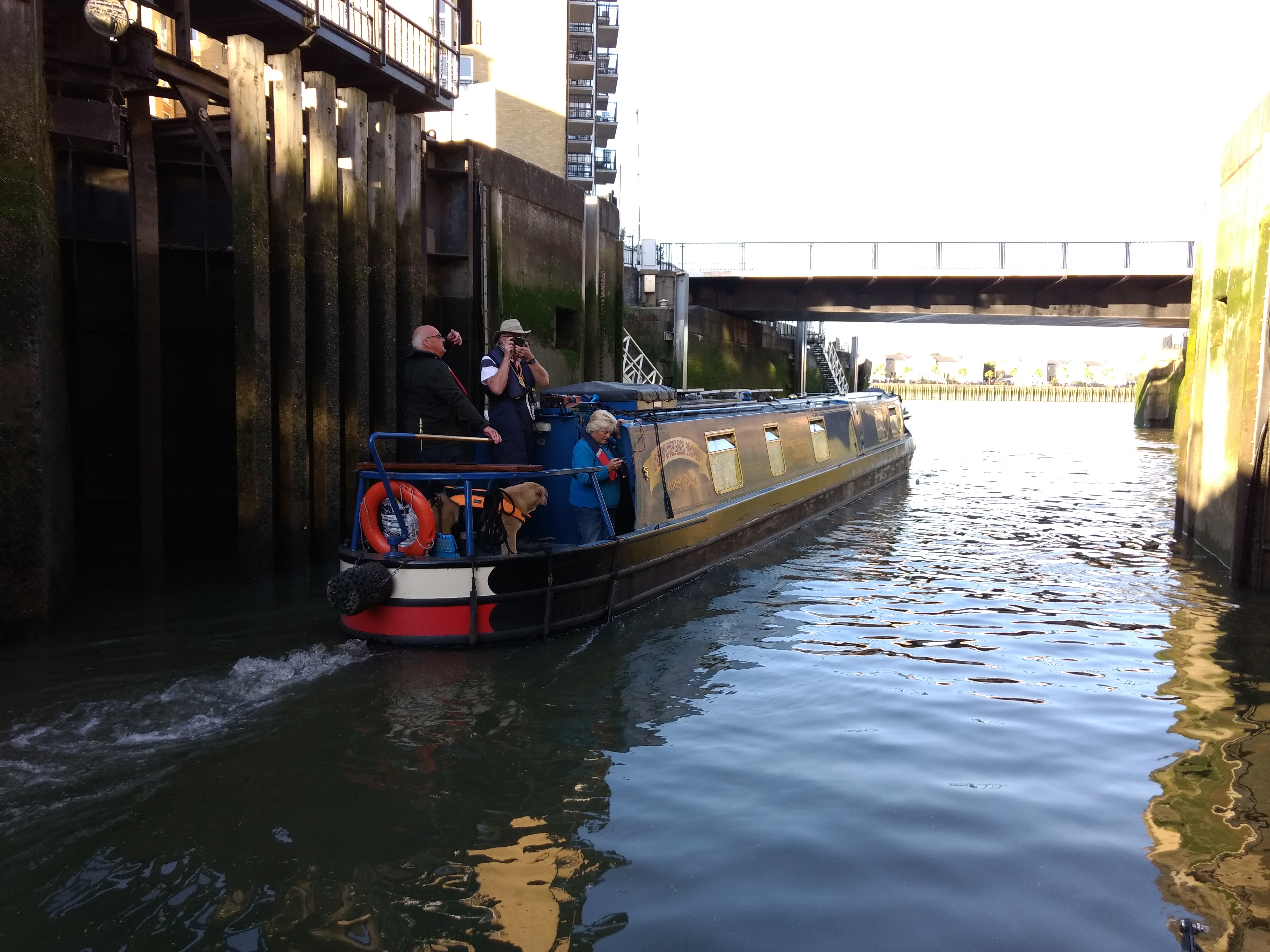 Preparing to leave Limehouse Lock with Neil, Simon and Chris (L-R) on NB Comfortably Numb (and Leila the dog!) 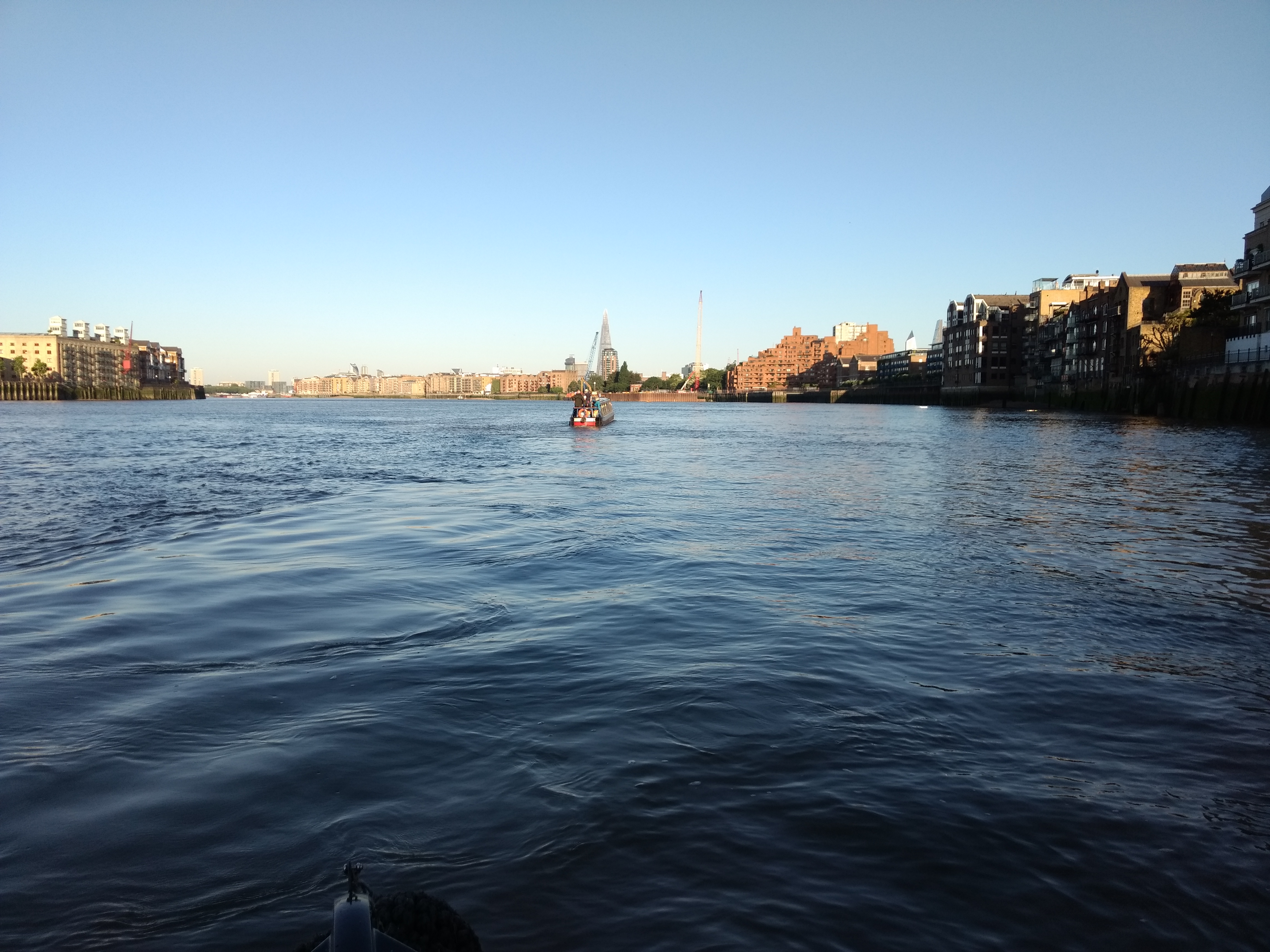 It was a glorious day, not a breath of wind so the water was about as flat as we could hope for. For the first mile we didn't see another boat moving so the water was unperturbed save for a slight swell, however as we approached Westminster the dreaded 'fast clippers' started to move. For those unfamiliar with this stretch of the river these vessels are ferries based on a catamaran hull powered not by propellers but by two underwater jet engines, they are the muscle cars of the boating world capable of up to 30 knots! Generally the speed limit on the tideway is 8 knots, about 9mph, in places this increases to 12 knots (14mph), however there are two stretches where there is no speed limit providing you display a flashing orange light. I can tell you from experience that the wash from one of these clippers at full stretch can be quite daunting. When encountering wash such as this you should turn the boat into the wash if it comes from the front, or away if from the rear, notwithstanding this a couple of times we had Andante pitching up at the front to the tune of about 3-4 feet out of the water, brown underpants recommended! 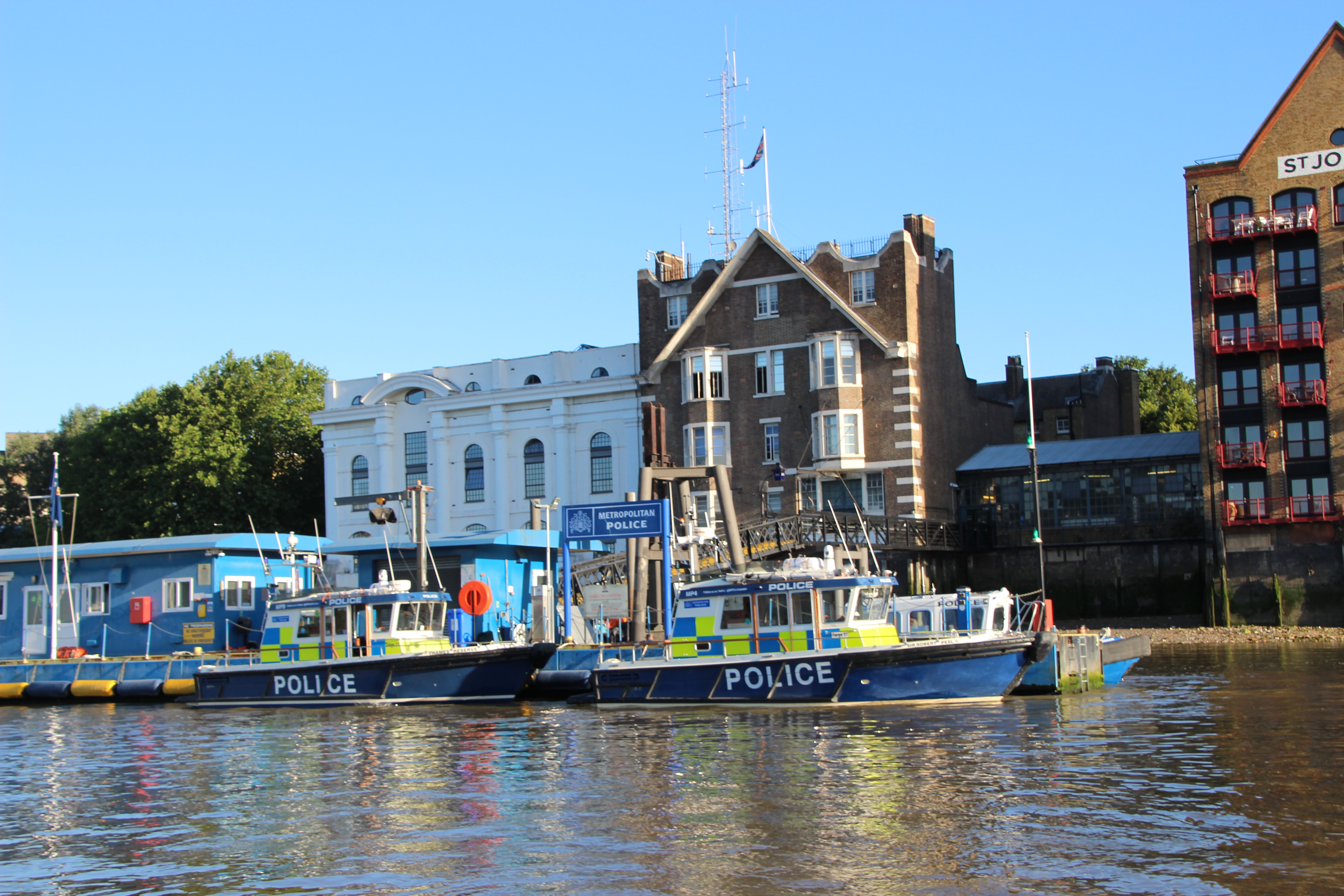 The Boys in Blue 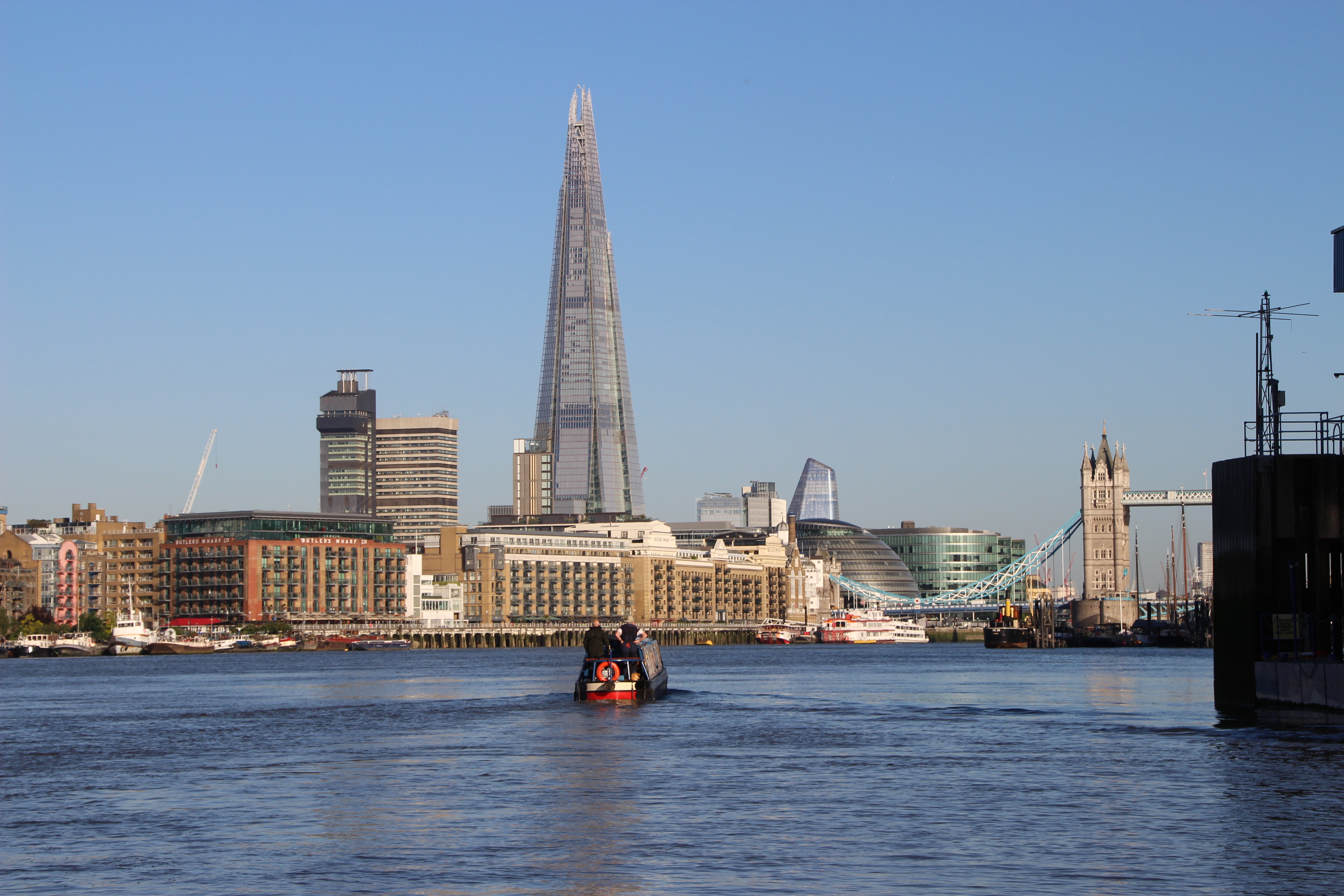 The Shard, Tower br in the background 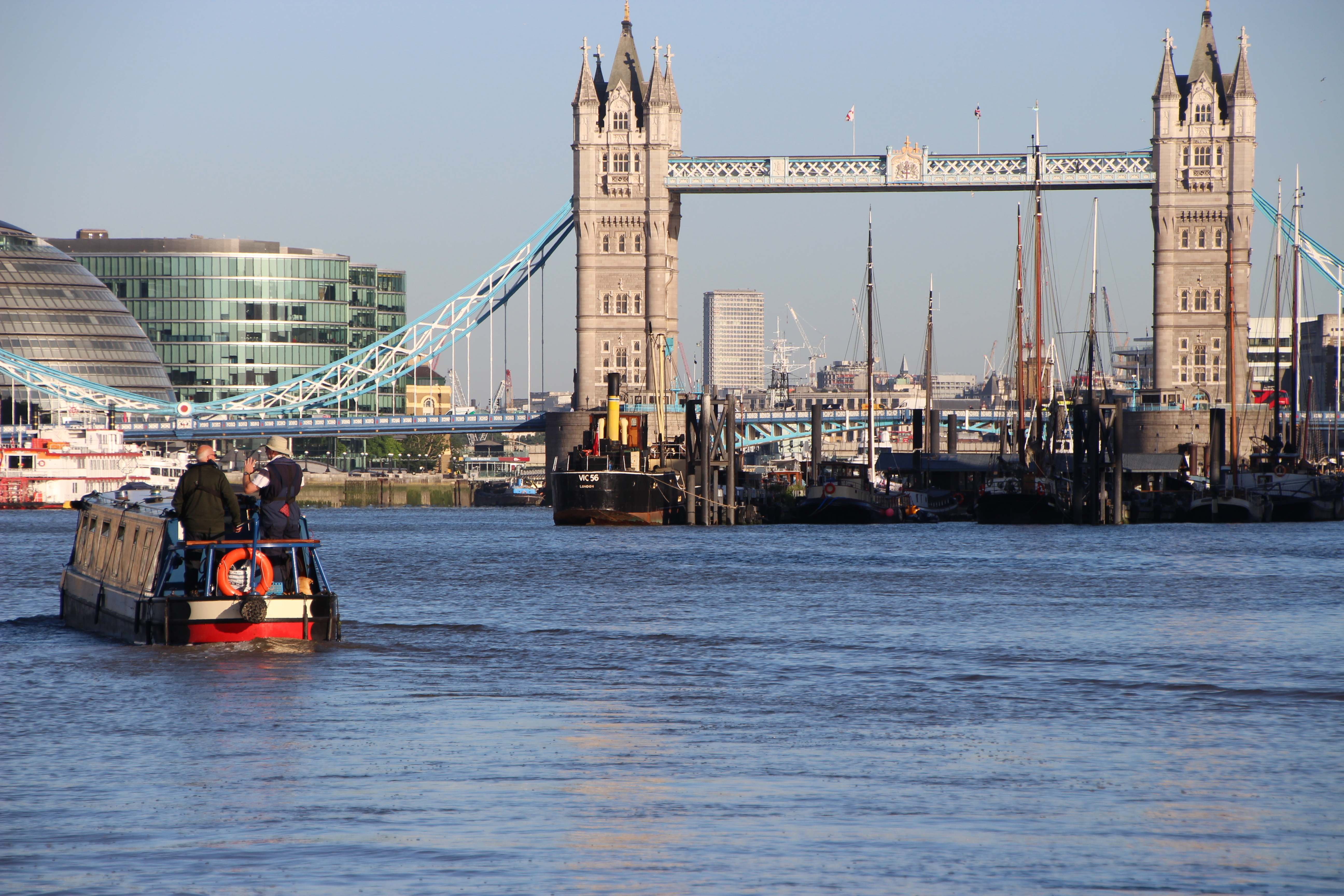 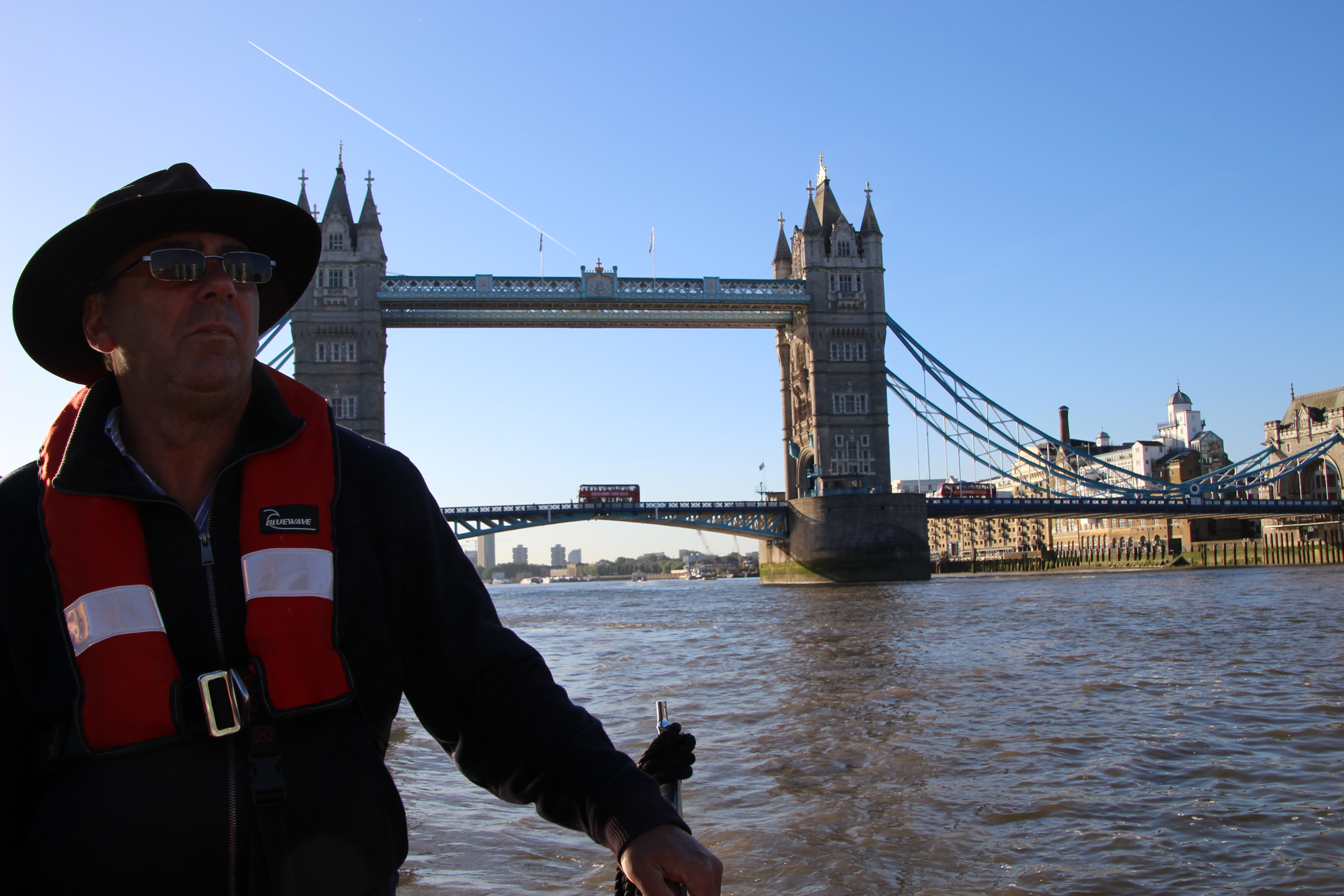 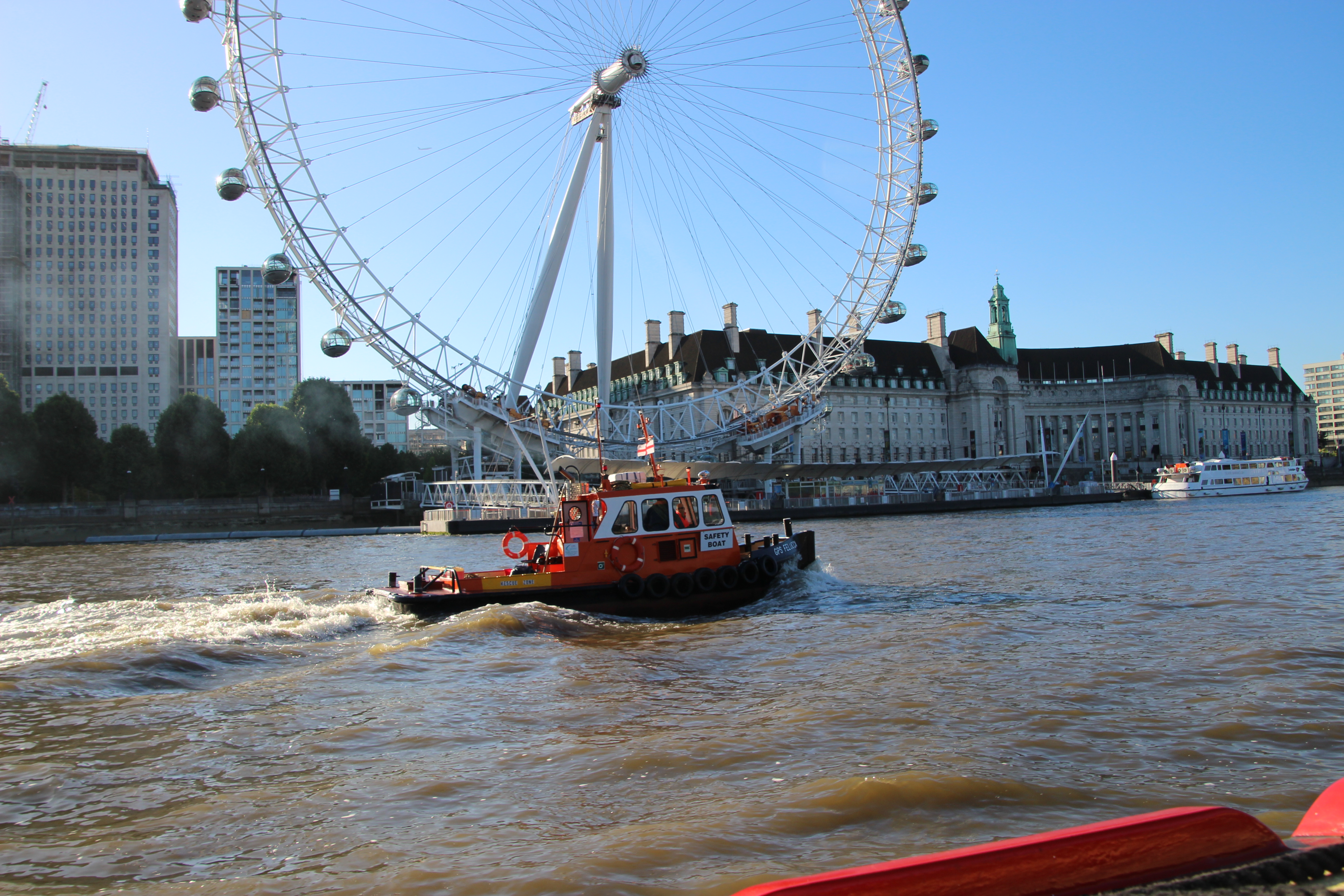 It's still the London Eye to me. All of that said we had a fantastic trip in near perfect conditions, if you plan on doing this yourselves I would suggest going out at about 6am on a windless day and coming out of Limehouse not in. Have a fallback plan in case the weather isn't with you as you don't want to do this trip in anything other than ideal conditions. There are factions within the Port of London Authority (PLA) that are trying to get narrowboats banned from this stretch, and I can see their point, in anything less than ideal conditions it's no place for a narrowboat, but carefully planned it can be exhilarating and seeing all the famous sights from the river is definitely worth it.

Once past Westminster things start to calm down slowly though you still need to keep a sharp lookout, canal boaters aren't in the habit of looking behind regularly but on the tideway you need to be checking behind every two or three minutes as other traffic can catch you up quite quickly. You should also familiarise yourself with the various navigation aids en-route, inverted red triangle means no entry, two orange lights indicate a navigable arch, and if you should you see a bale of straw suspended by a rope under a bridge this isn't as you may imagine a feeding station for passing animals but rather designates an arch with reduced headroom (yes this is really still used today). A flashing white light means that a fast or large (or both) boat is approaching and you mustn't use that arch, or you just follow Simon in the boat in front.

Something I've always said narrowboater should learn is the sound signals which are commonly used all down the Thames. Another skipper giving you six blasts on his horn isn't seriously annoyed at you, he's just telling you he's winding to port. So much clearer than wildly gesticulating from the tiller with your arms! 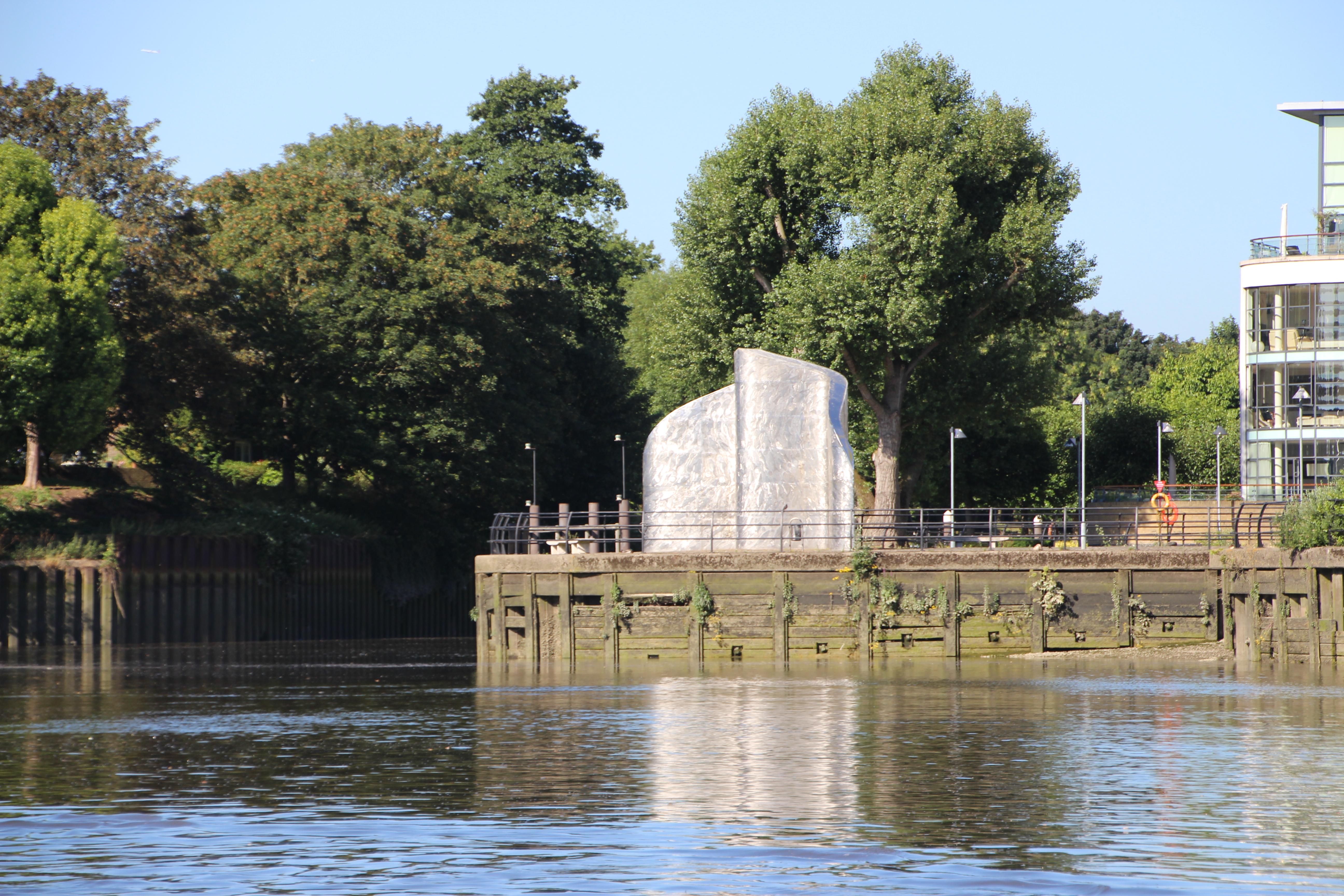 The entrance to Brentford lock

By the time we arrived at Richmond half tide lock about 3 hours later it was all open so we could avoid using the lock; the weir at this lock is raised to allow free flow for 2 hours either side of high tide (high water for us nouveaux mariners) each day, otherwise you have to use the lock for which there may be a fee depending on who you believe. 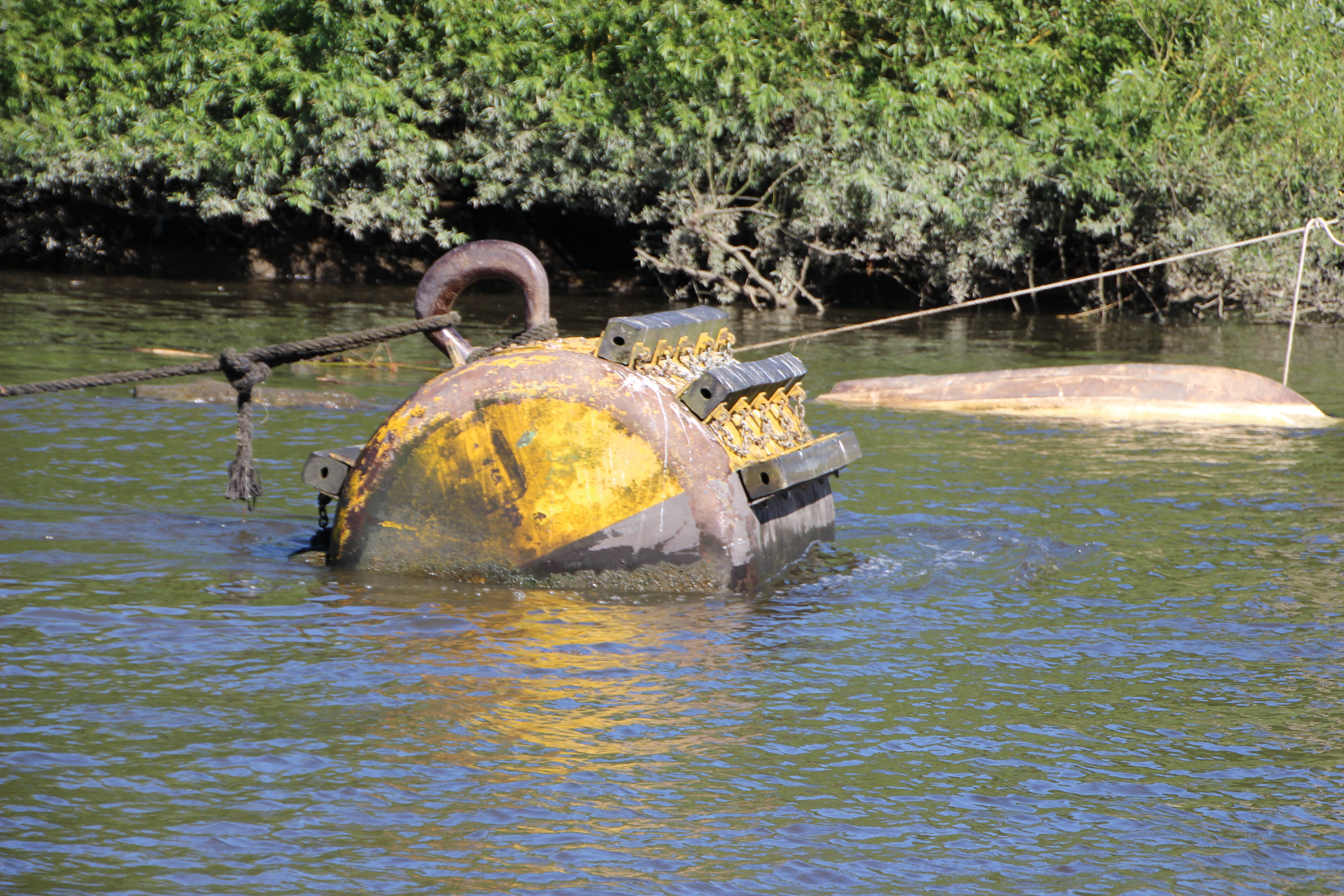 Keep an eye out for these, they're mooring buoys not mines! A mallard going as fast as the eponymous steam train. Another hour sees us back at Teddington and off the tideway. The river seems so much more benign now having been on the lumpy waters of the tideway, I wonder if we'll be bored when we get back on our canals? Will Andante miss the wild adventures cavorting with the fast clippers through Westminster, sharing water with HMS Belfast, rubbing shoulders with the seat of government? Or will she pull on her cardie, settle by the fire and reminisce to herself about the sights and sounds of Camden lock, sharing a mooring with the illustrious boats of The St Pancras Cruising Club, wading through the weedy Regents canal and getting her prop fouled every 10 minutes and decide that a quieter life is for her back in calmer waters?