Andante's adventures on the Llangollen

Andante was a little out of sorts yesterday, bit of a cough in the engine department, so today started with a spa treatment for her in the shape of 8 litres of oil and two clean fuel filters. I hope she feels better today! 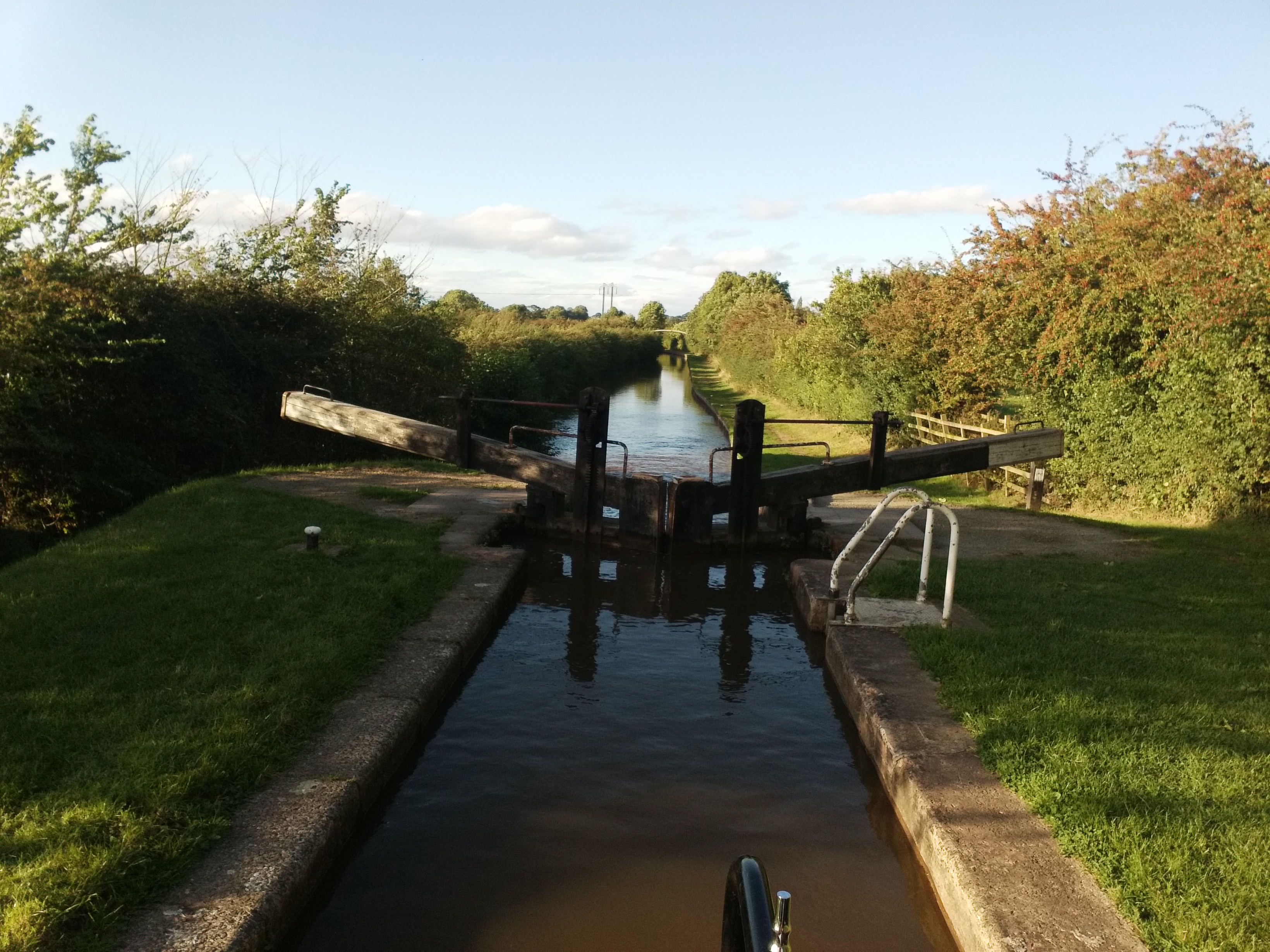 Hurleston locks were a bit busy and windy! Some people a bit stressed so didn't have time to get the camera warmed up so this image is a little higher up at, I believe, Swanley lock 2. The volunteer lock keeper suggests avoiding Thursdays to start the Langollen. However having called at the services at the top of the first flight of 4 for the necessaries we are moored up just past bridge 11 catching the evening sun. 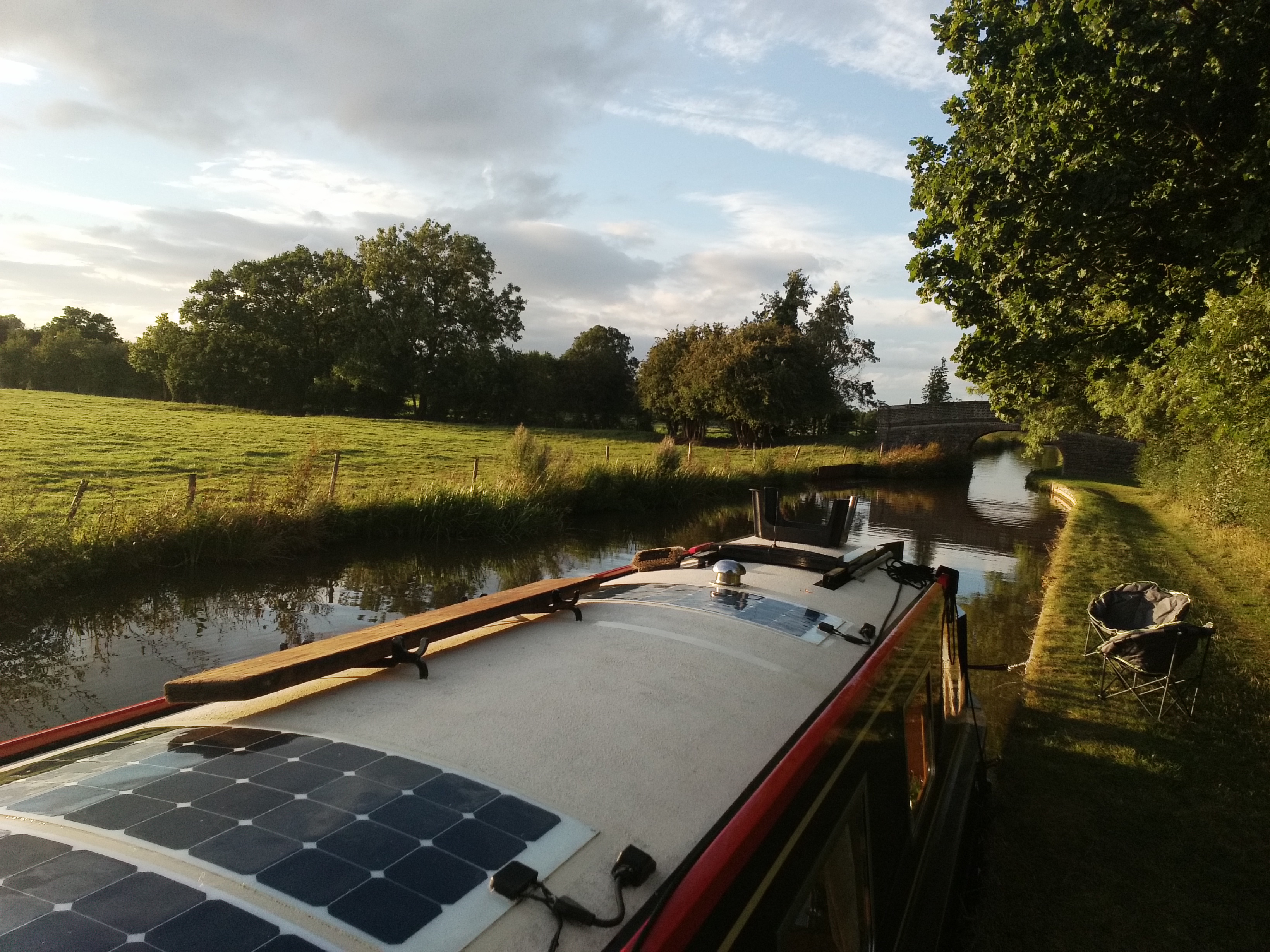 We were warned about the bye washes and not without reason, much water is flowing over ready to catch the unwary steerer out! 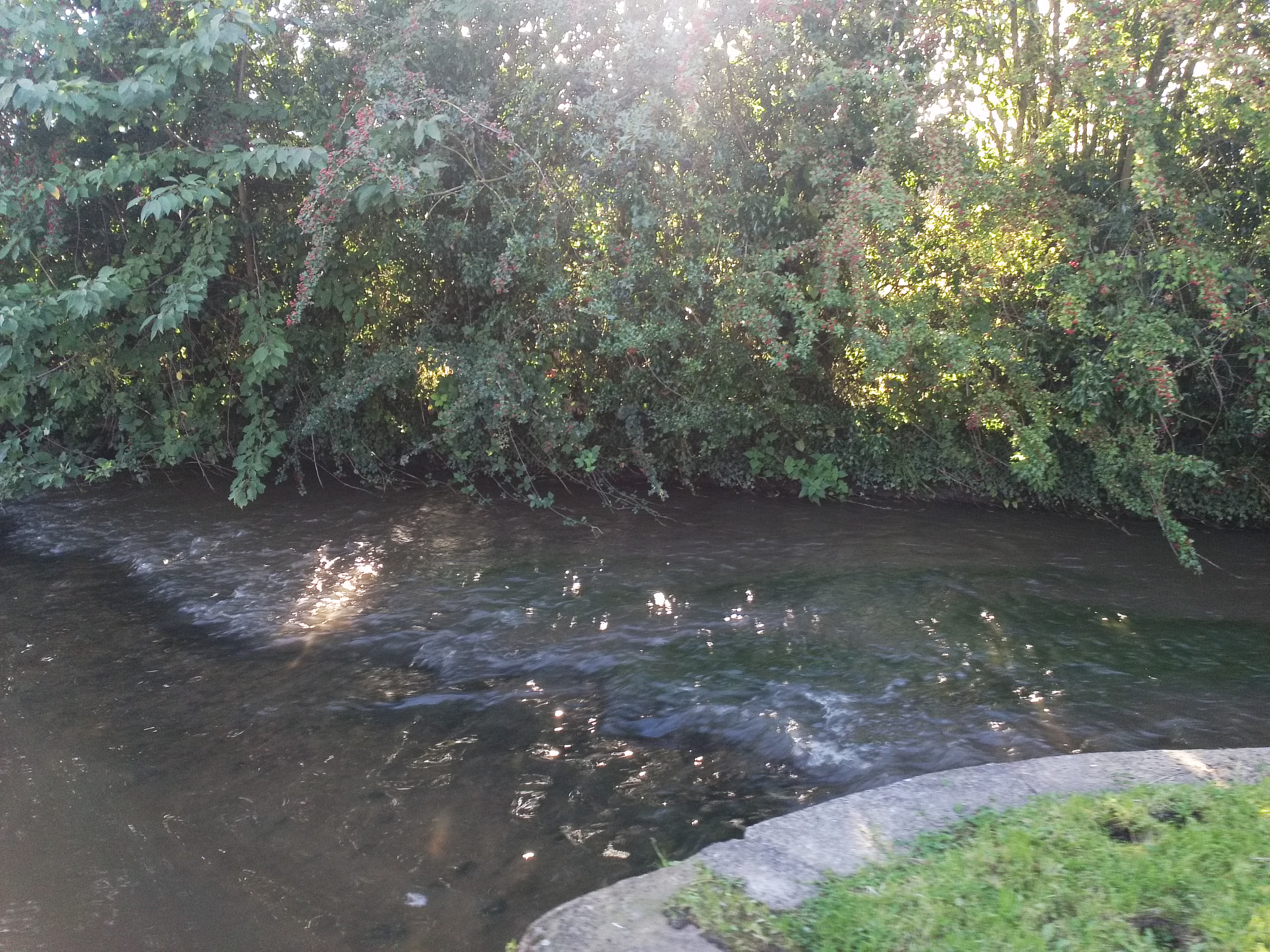 Andante seems to have got over her malaise not a single cough yesterday so treated her to 100l of best red at 61p/l from Venetian marina on the Middlewich yesterday afternoon.

Lots of boats going down this morning so hopefully it will be quietening down up at the top, mostly hire boats with lots of scratches down the side, I hope this isn't a portent of things to come!

.......Well it seems like my gearbox has taken umbridge at being left out of the spa day yesterday and decided that it will only go forward when it wants to - a slipping forward clutch. Looks like we'll be upgrading to a PRM150 very soon, until then we'll limp along. #helpfundbriansgearbox

Lunch at the Cotton Inn was OK good selection of beer and cider available, the farm shop next to the boatyard is to say the least disappointing, the local Spar isn't much better!

Changing the gearbox oil this afternoon in the hope that it will help the clutch get a better grip, "Get a grip on yourself" I said!

Anne is revising her Spanish in preparation for Madrid in 3 weeks time.

Had an excellent meal in the Dusty Miller pub next to br 20 and Alvechurch Boat Centre, highly recommended but moor between br 18/19 to avoid the caravan park between br 19/20. Despite it being a changeover day the guys at the boat centre we very helpful with my gearbox issue today and they also have a decent chandlery attached if you need any boat bits.

Marbury tomorrow and testing the gearbox after changing the oil, hoping for at least a temporary fix! I feel drained after hanging upside down like a bat be engine bay today.

Woke up to a chilly 12C according to BoatMON today, hope it warms up a bit!

The gearbox seems better today, let's hope we continue onwards to Grindley Brook as that's our target for lunchtime. 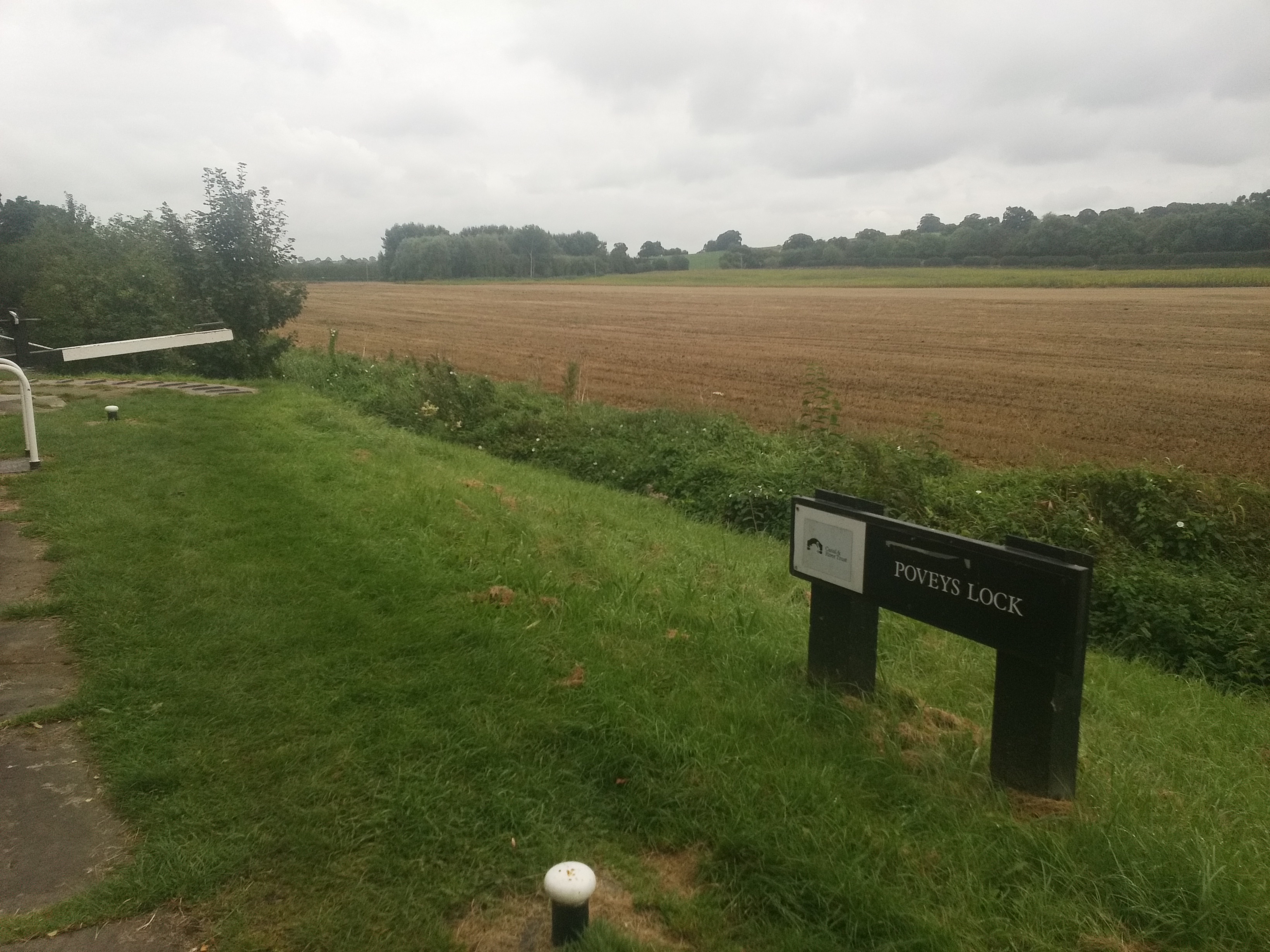 Upwards and onwards to Grindley Brook aided by the friendly lockie on the staircase locks.

Not one but four water points! That's all for today as the overnight mooring is idyllic but lacking in internet connectivity, will post the rest of today's stuff tomorrow..........

With the blessing of internet here's part 2!

Some lovely scenery on this stretch however there is much to test the mettle of the steerer, being a narrow canal bridge holes will remind the wandering mind to pay attention to the job at hand. Being as shallow as it is narrow the boat seems to hesitate as it passes, as if unseen hands claw at your hull saying "don't go on, it's folly to proceed". But onwards we must go! 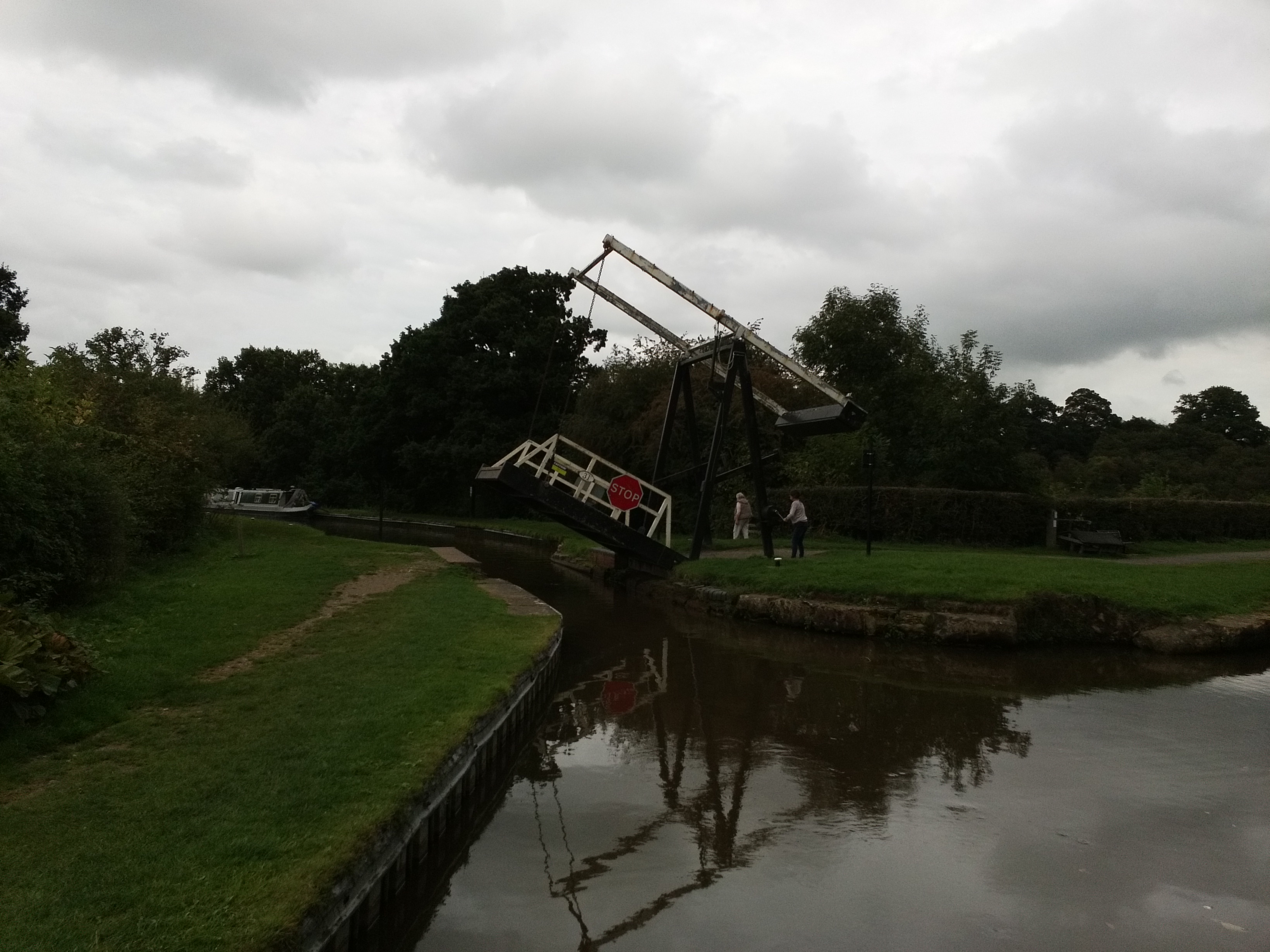 Lift bridges are a feature of the Llangollen and SWMBO says that considerable effort is required to operate the windlass driven hydraulic mechanism, take care when passing under as conference is limited on the offside. 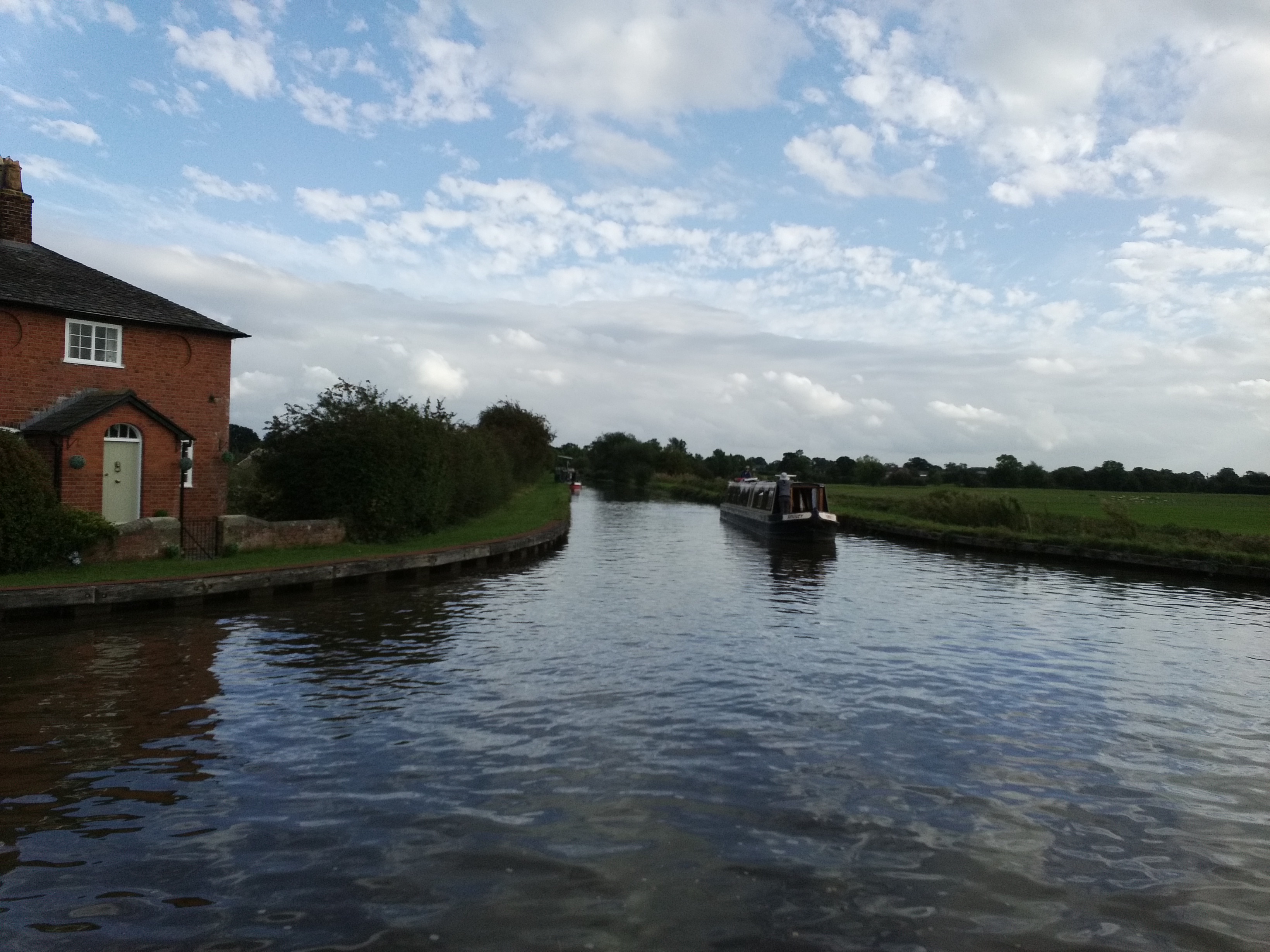 The Prees branch looms on your port bow but comes with dire warnings of the herculean strength required for the first lift bridge.

With wearying bones we find a quiet mooring with a spectacular view 1/4 mike after Clapping Bridge (49) just before the sharp right turn. Dinner and an(other) early night then. 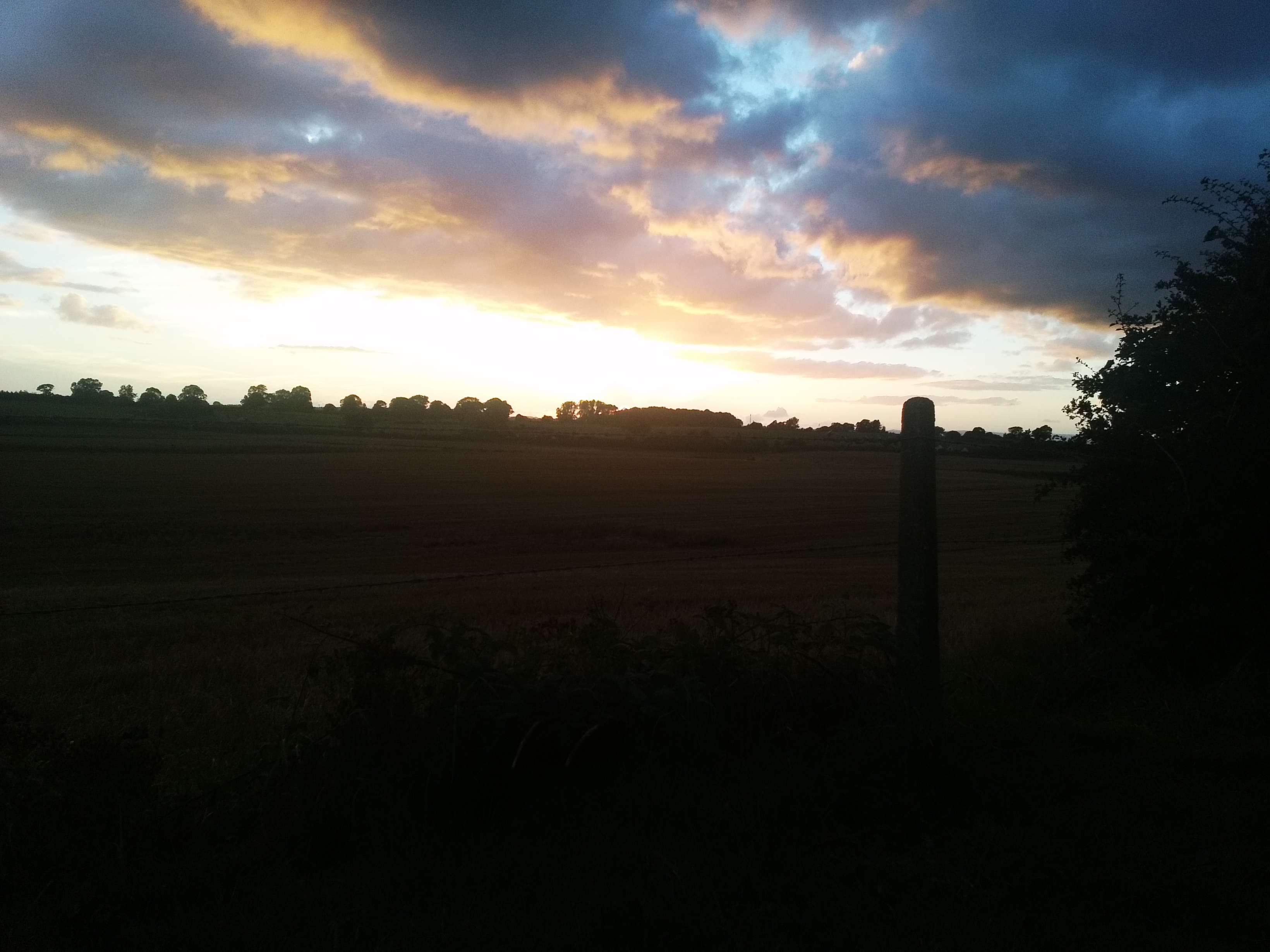 Reprovisioning day today so a shortish leg up to Ellesmere this morning. 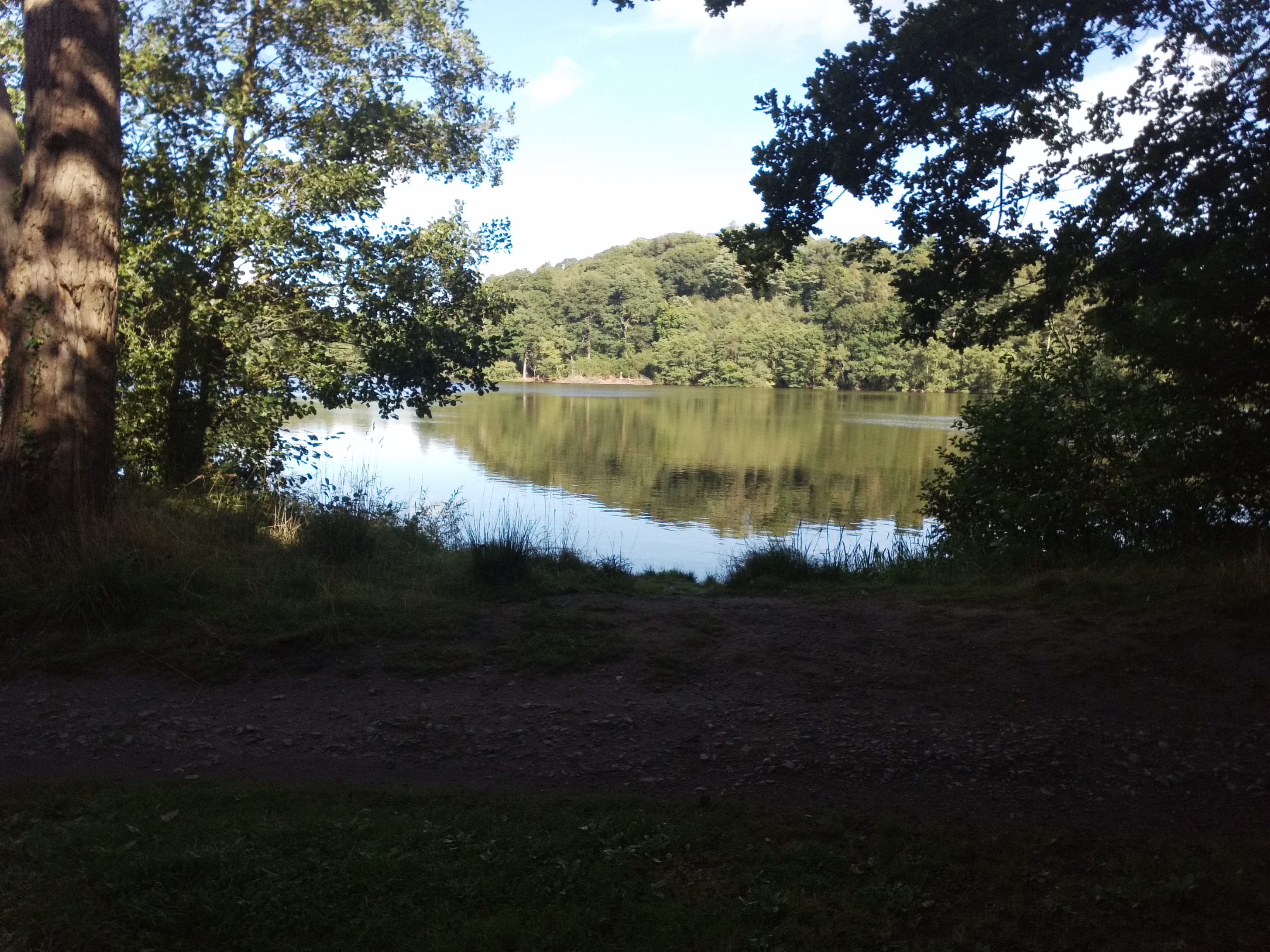 And onwards to Ellesmere tunnel 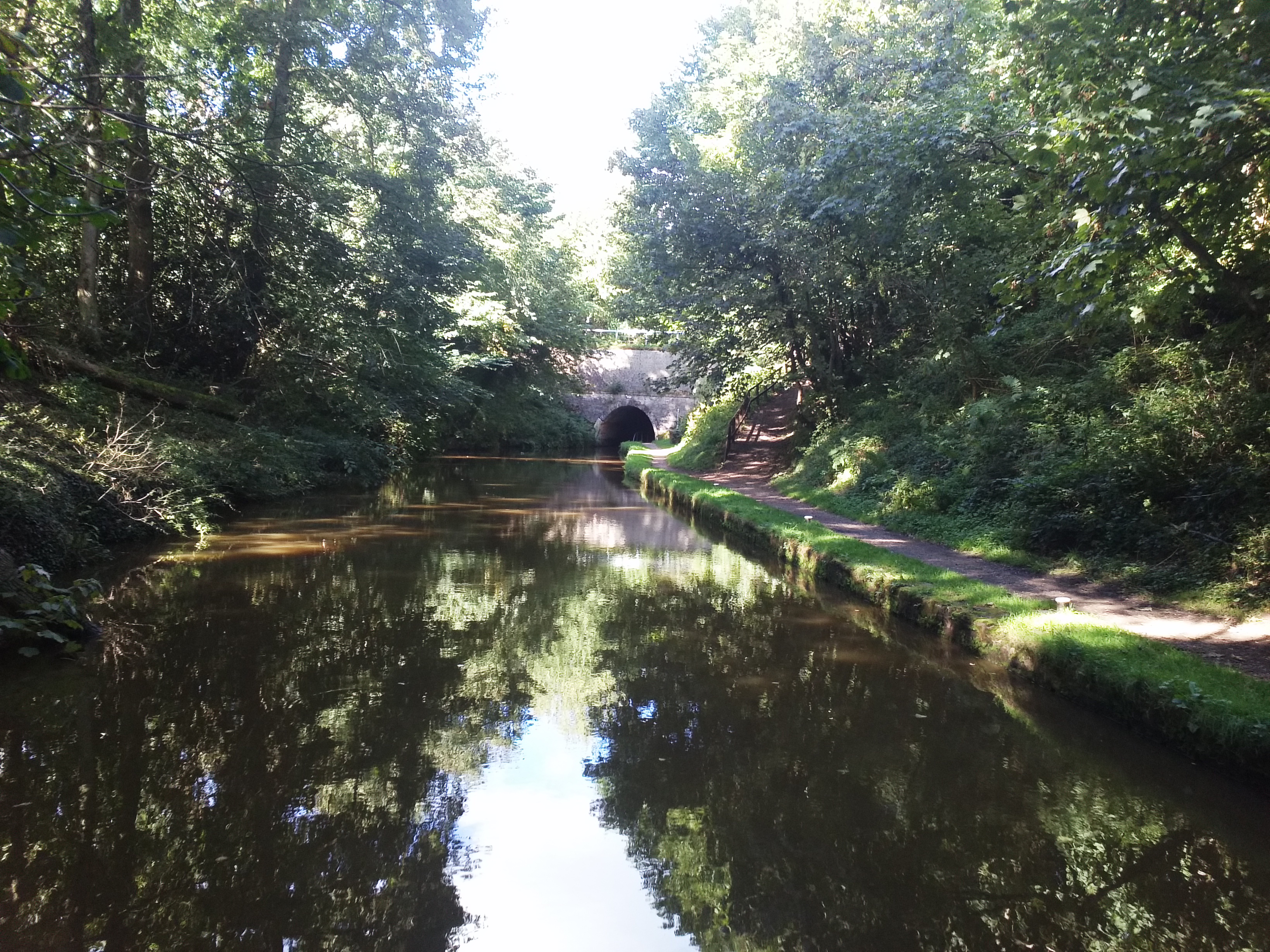 Arriving at the Ellesmere branch we find mooring to be at a premium, however friends we had made the day earlier on nb Kingsley kindly shuffled up a bit and we squeezed in behind them before setting off to explore.

There is a Tesco supermarket next to the moorings and it is a short distance to borrow a shopping trolley to transport your vittles back to the boat. The mere from which Ellesmere gets its name is a 10 minute walk from the moorings and boasts a bar and restaurant next the mere for those inclined. We had however spotted an unprepossessing little Greek restaurant by the name of Meze in the town earlier and returned for lunch. Do not judge this restaurant by appearance, the patron is a friendly Greek gentleman and the food was spectacular, washed down by a bottle of very acceptable house red, all for £38. 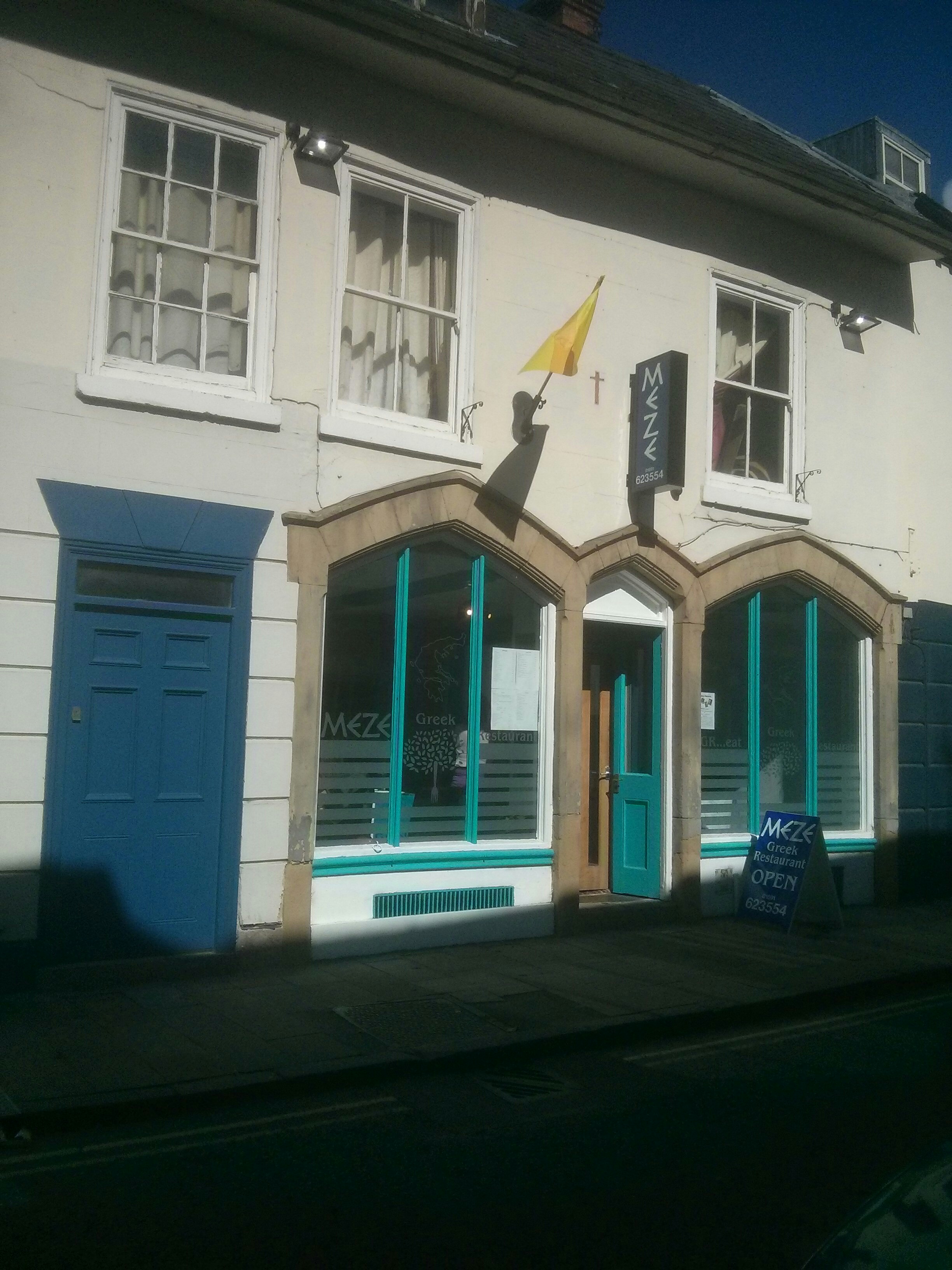 After recovering from an overindulged lunch we continued on to the top of the Montgomery canal and thence to our mooring for the night.

Tomorrow we head for the summit!!

An early start today put us ahead of the pack heading towards the only two locks of the day at Marton. More of the same scenery wise, which isn't a criticism, but we get a hint of what it must be like here in the height of summer as we hit an albeit small queue at the first of three two locks, while we are waiting the queue grows to 5 boats so we're glad we had the early start as everyone else is heading in our direction. 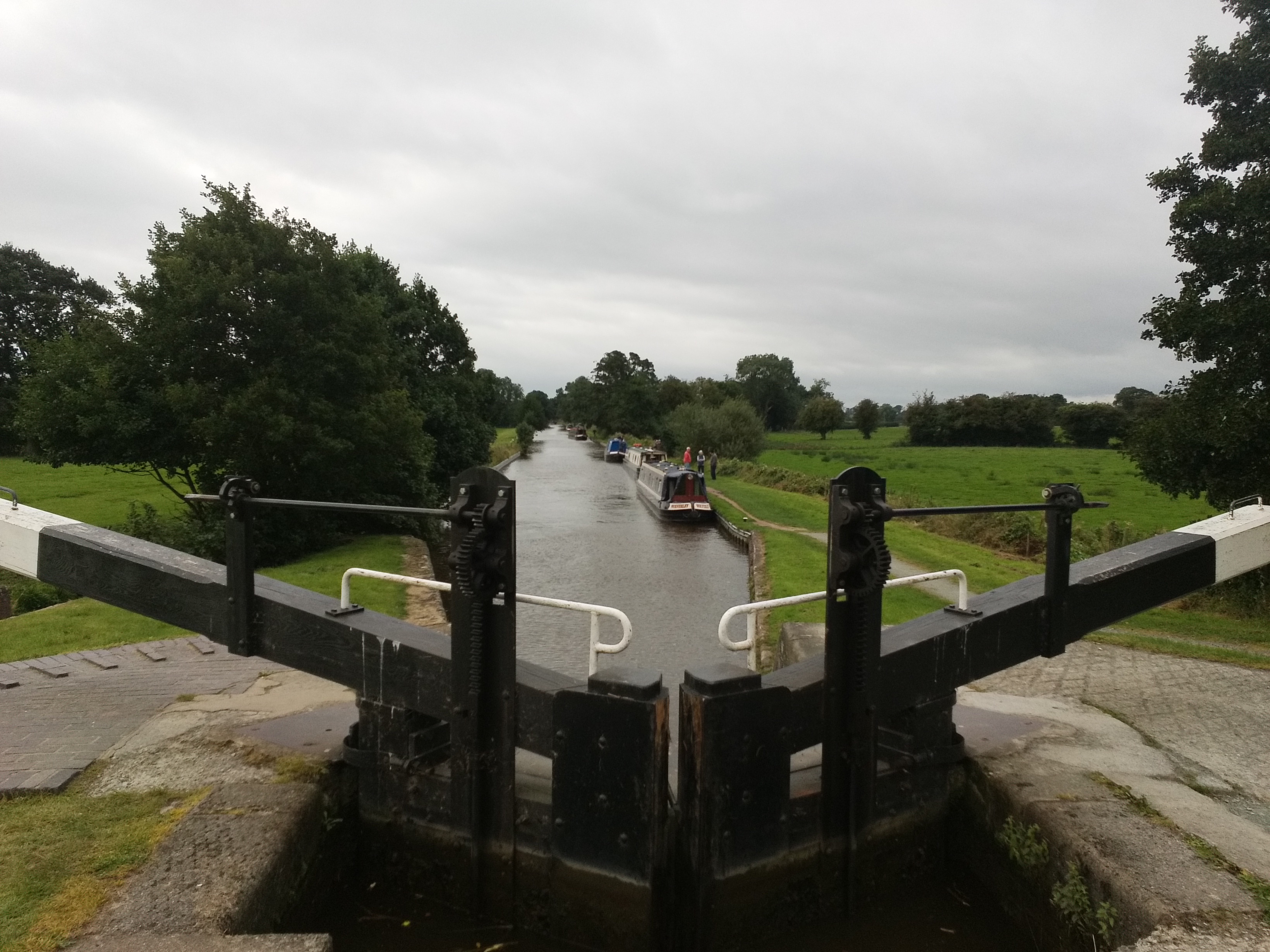 Foregoing the water point for fear of falling behind the queue we press on! 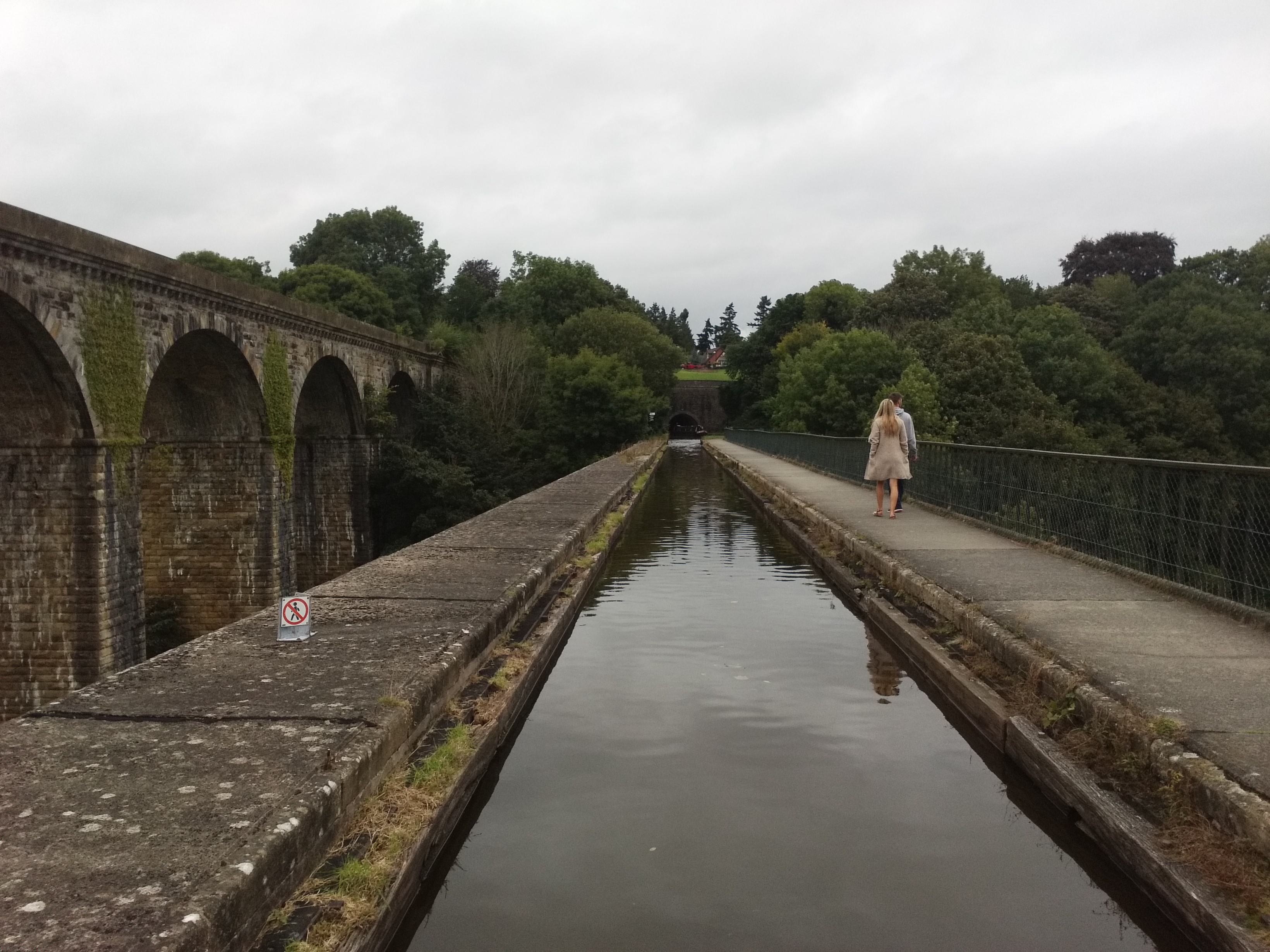 Two walkers wisely following the sign not to walk on the left hand side of Chirk aqueduct! Next the Chirk tunnel follows immediately after. 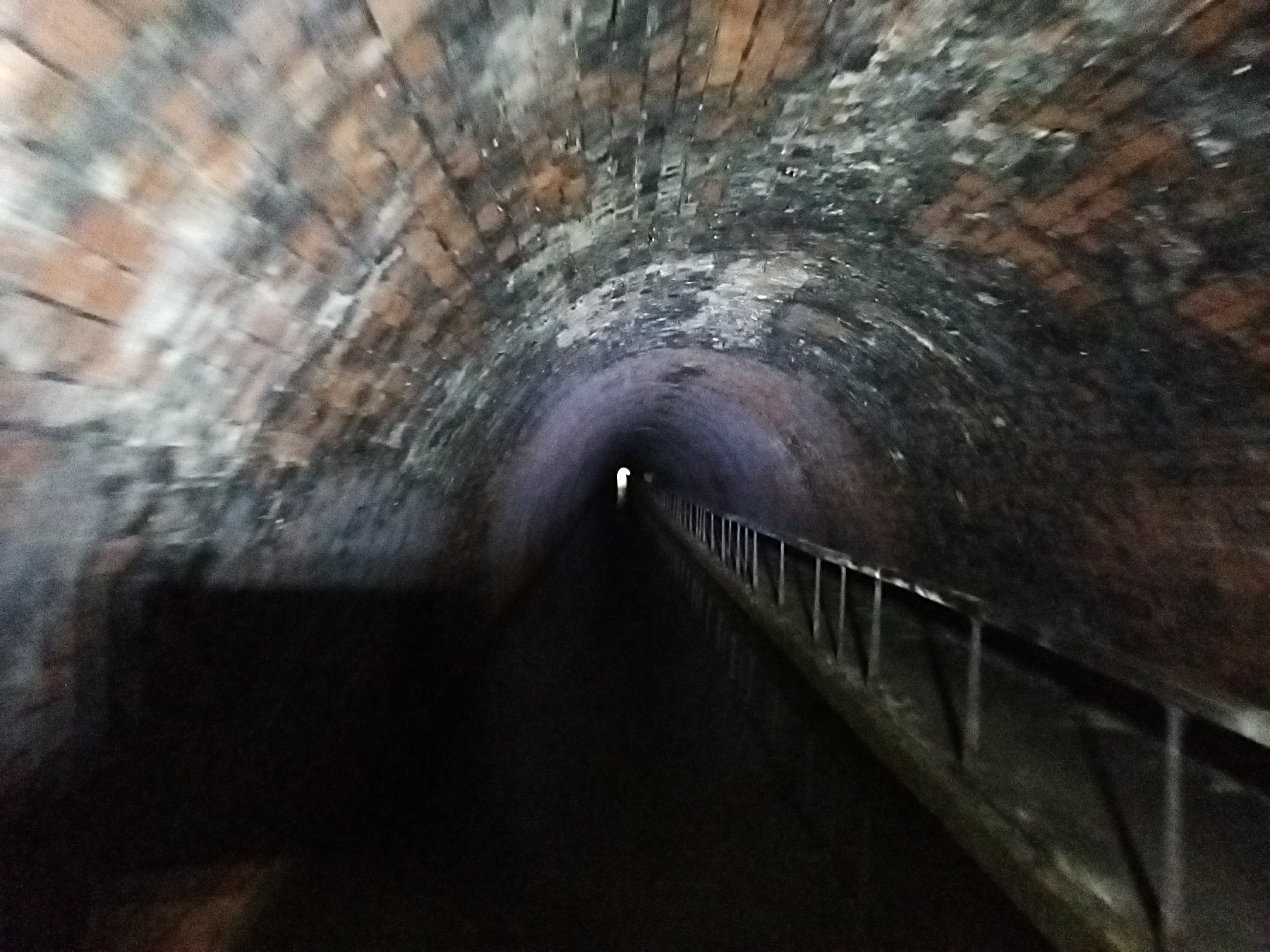 I found the narrow tunnels quite difficult to steer, the boat constantly wanting to cling to the wall, there's a knack here... I just haven't learnt it yet! Try again on the return trip. 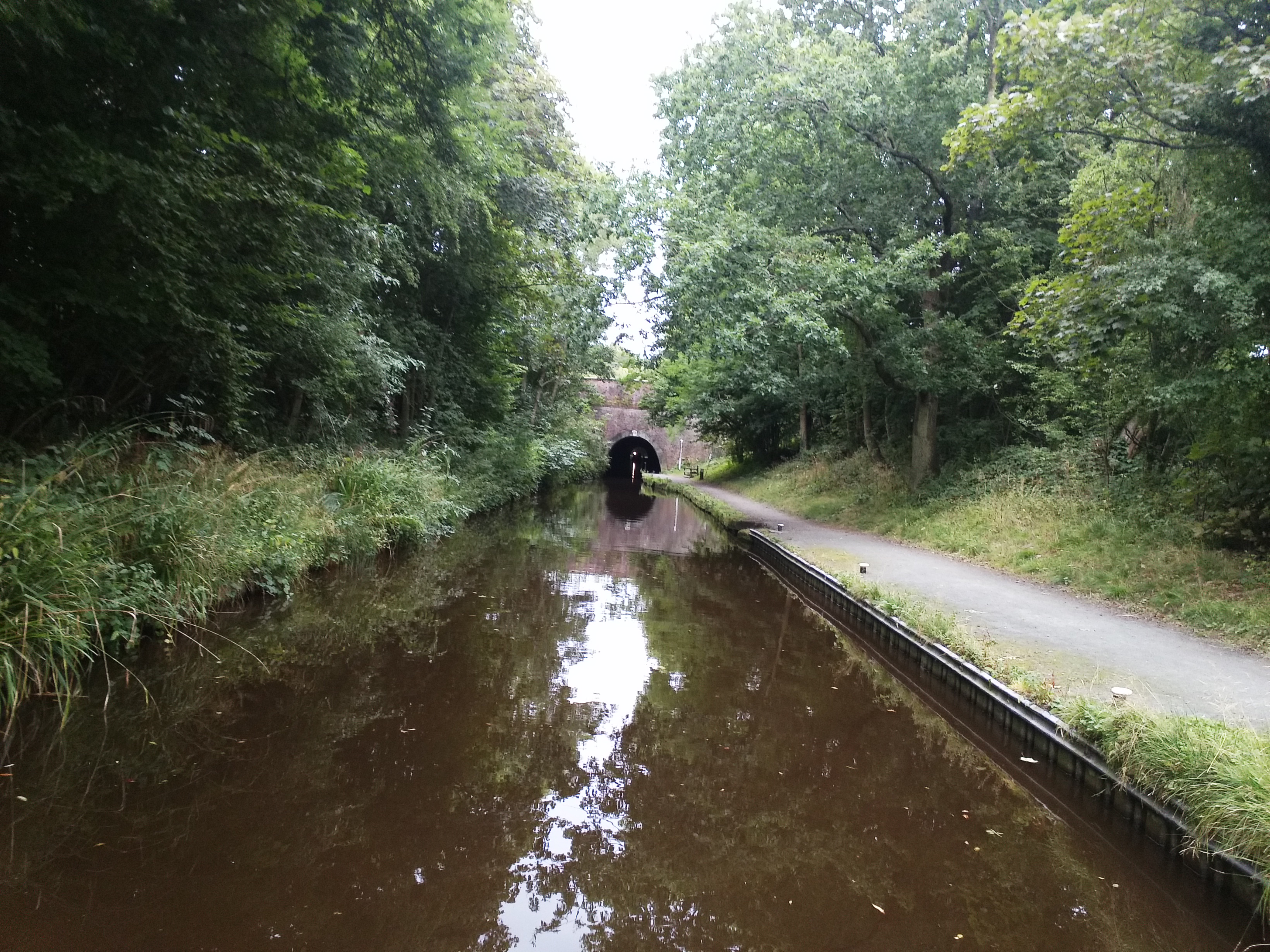 OK we've all been waiting for it and here it comes... 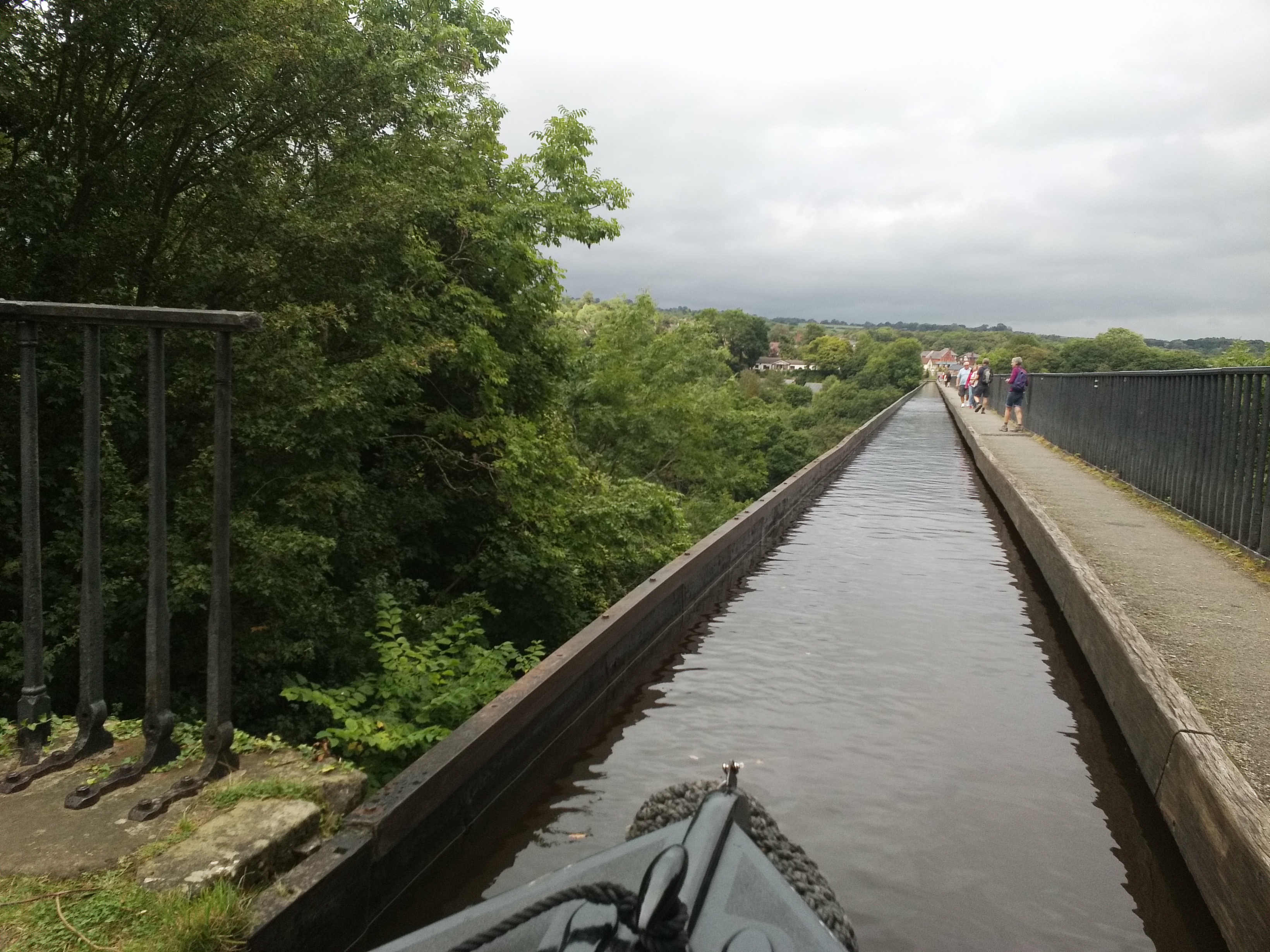 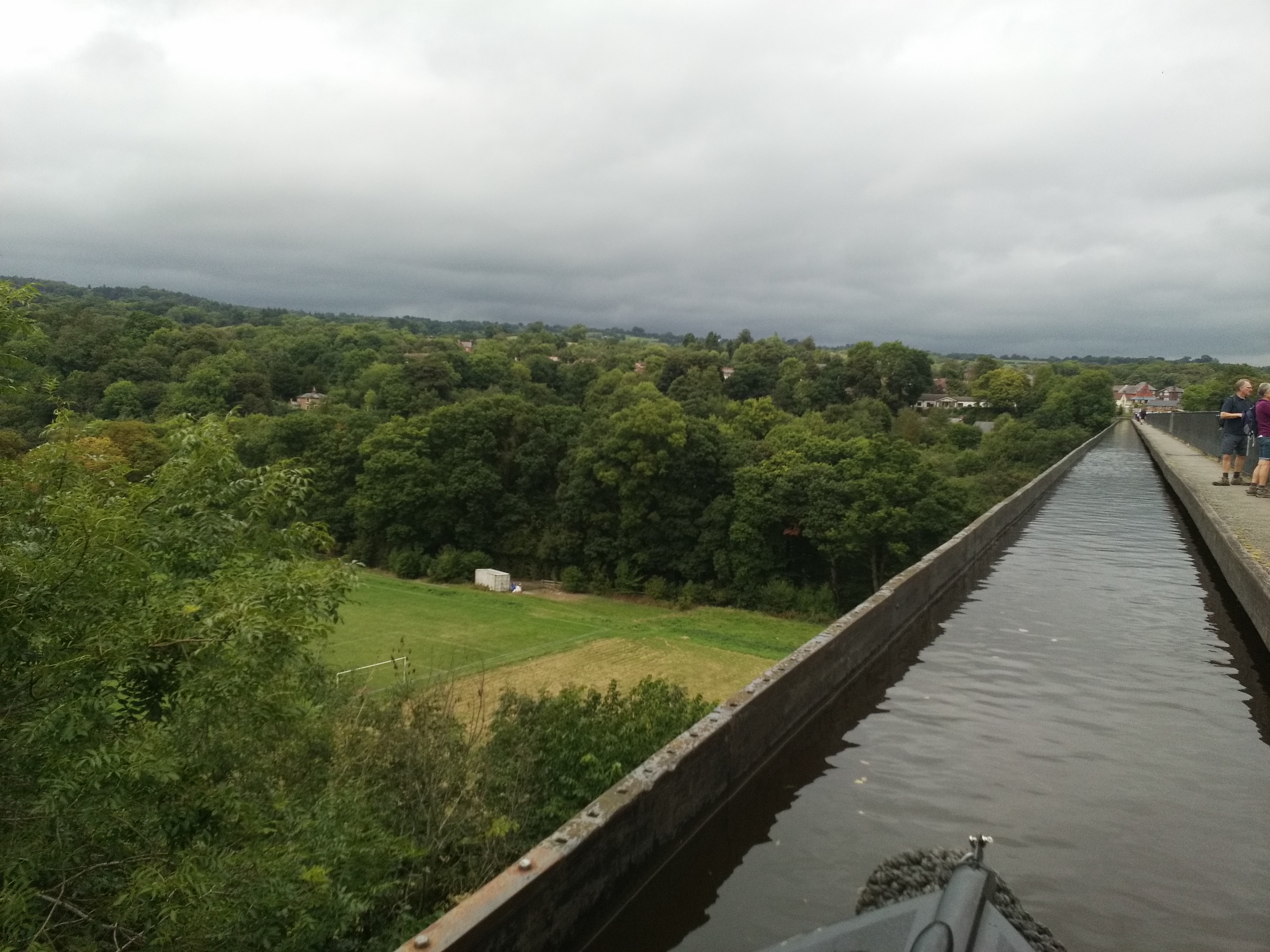 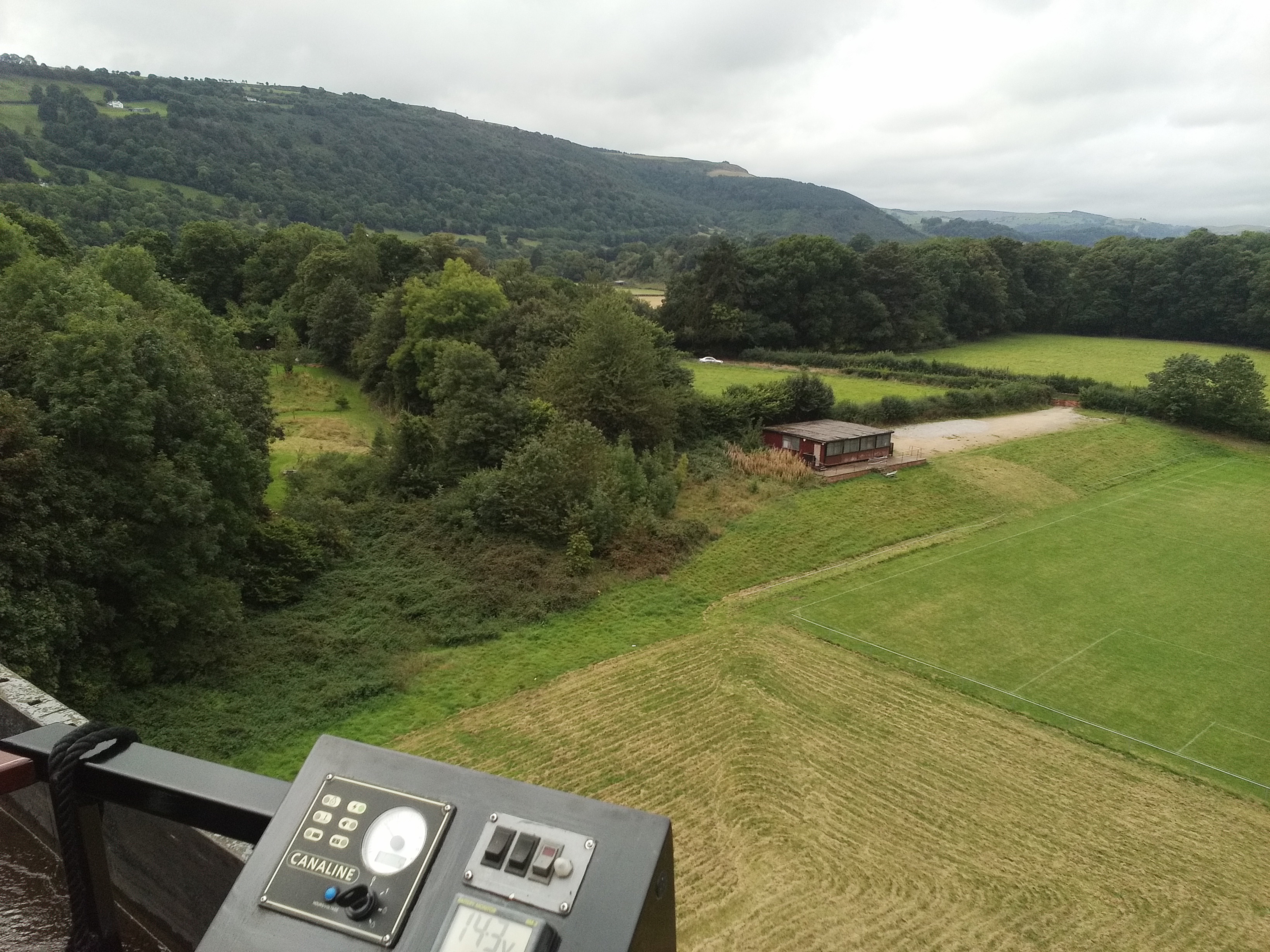 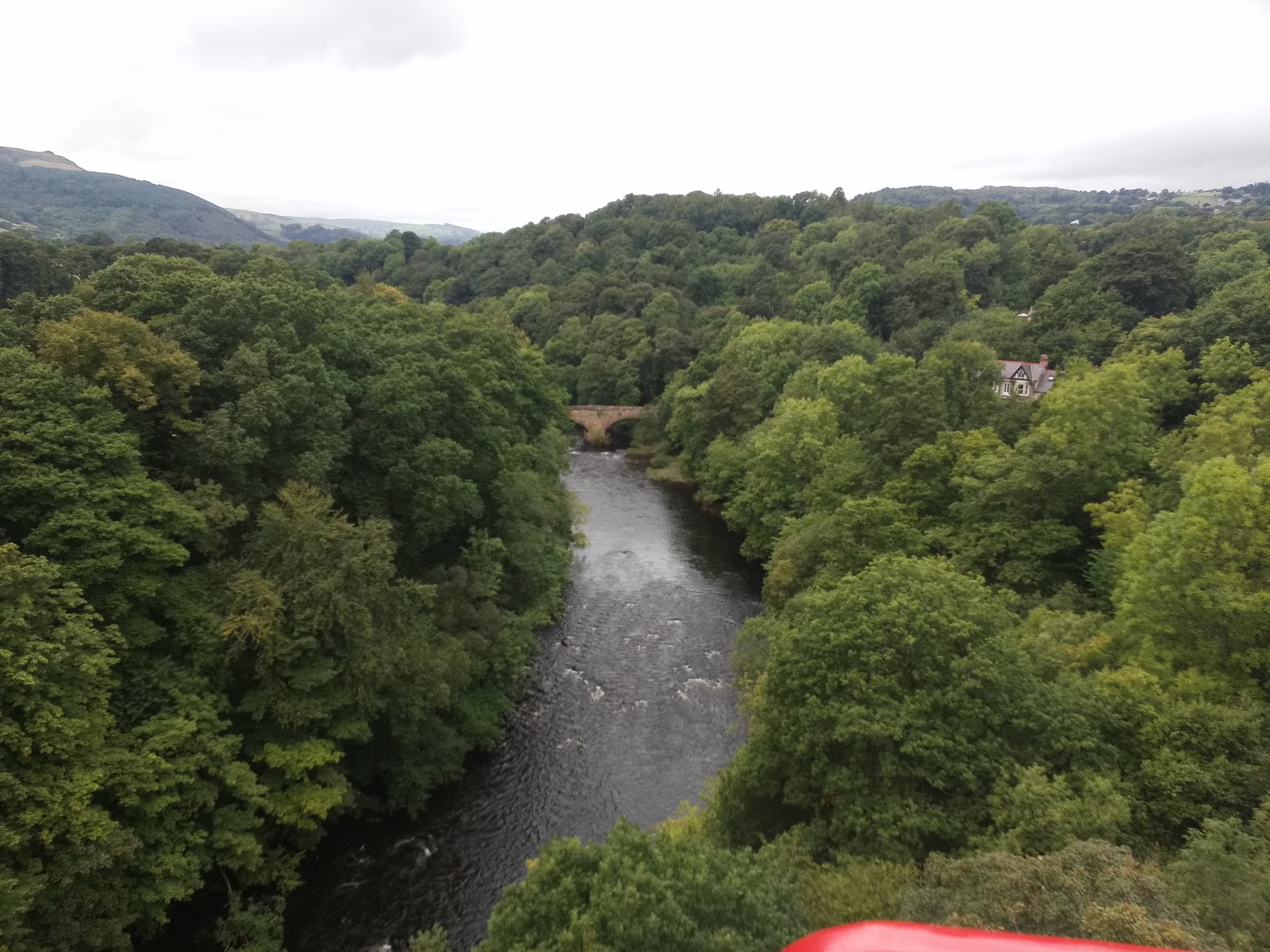 That 126 ft to the ground, nicknamed the stream in the sky.

At the end on the aqueduct we see Trevor, that's a place not a bloke, and make a sharp left into the last leg of the Llangollen. Now this is not a deep canal, nor is it wide, and as it feeds 12 million gallons of water a day into the Shropshire Union canal there is a distinct flow here that you will definitely notice. Your trusty Nicholson guide will in one place inform you that 21 inches is the maximum your boat should draw to enter, in another place it says 24 inches and a CaRT notice in Ellesmere says 27 is the limit. All I can say is that our vessel draws 24 inches and we didn't scrape the bottom anywhere on our trip.

We buddied up with two young men on nb Edith who helped us along as newbies. For the most part it is like any other narrow canal, due care being needed when passing oncoming boats, however there are places where the combination of narrowness and shallowness will require considerably more engine revs than you might imagine to progress.

There are in total three sections towards the top end where only single file passage is possible and you need to send a runner ahead with a mobile phone to stop boats entering whilst you transit the narrows. The first section is 300 yds, the second 500 and the last about 75. Whilst it is possible to moor in line with the narrowness of the canal you would at least need to choose your spot carefully. We went to the end and for the princely sum of £6/night you can purchase mooring in the small basin at the very top of the canal with your own water point and free electricity hook up. Maybe we were lucky as spaces were at a premium during our (maximum) 48h stay. 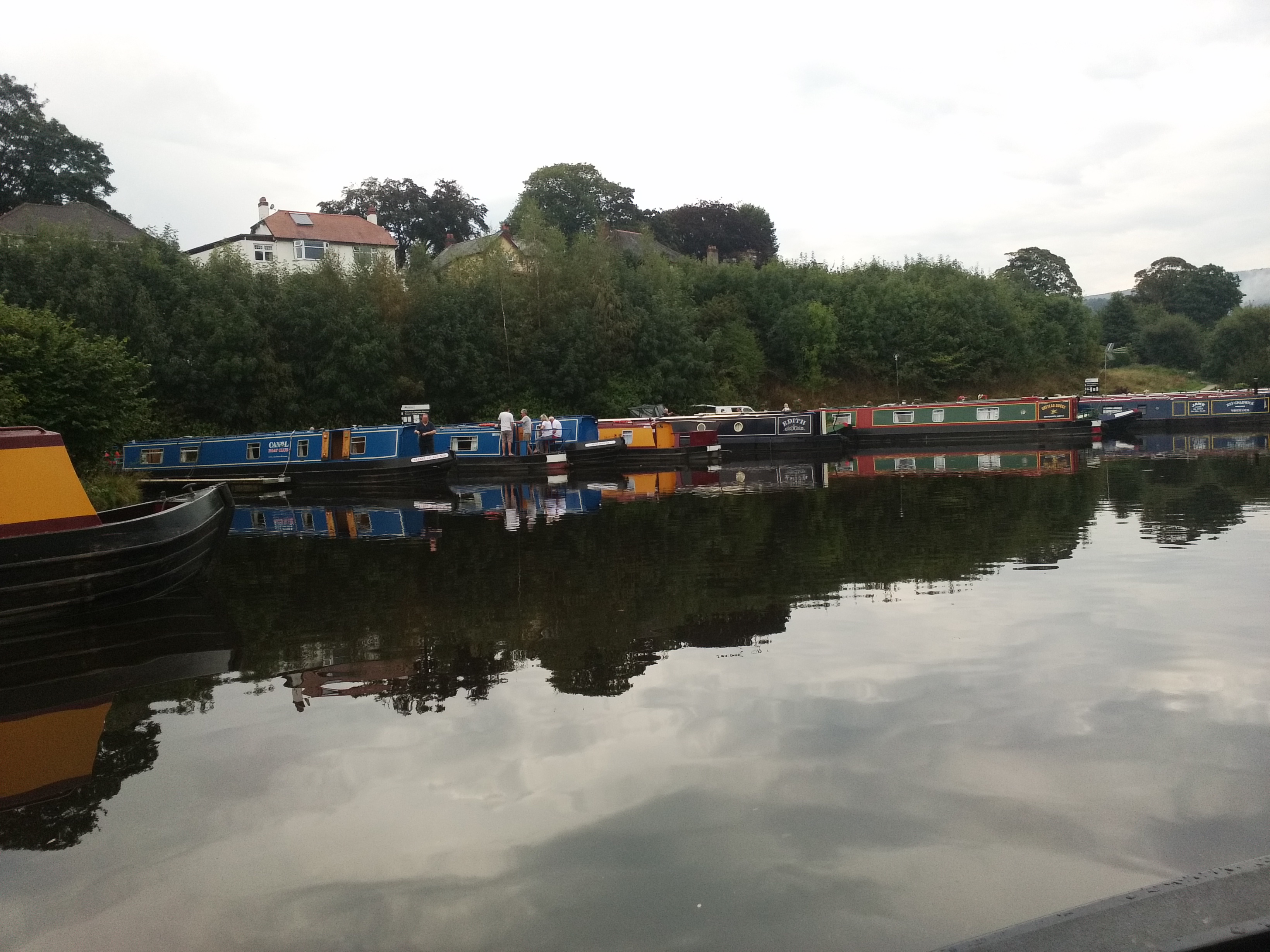 The pontoons are quite short so reverse mooring is required, much entertainment can be had watching the antics of other boats coming and going.

Llangollen itself is of course home to the Eisteddfod which happens in July each year, it is also home to the Llangollen heritage railway which will take you up the Dee valley to Corwen and back for about £15. The navigation beyond Llangollen isn't passable other than by the horse drawn boats offering trips up to the horseshoe falls which is worth a trip. Also there is the Chain Bridge by the hotel that bears it's name.

An really start was planned but the sound of engines starting arose us at 6:30, deciding to tag along we were cast off by 7am but that still put us 13th in line. Anne went ahead by bicycle in the narrow bits and with the flow behind us we had an uneventful trip archiving at Trevor in just 2 hours. Pontcysyllte was beautiful with the morning sun and mist, this must be the most photogenic time to choose as you can take your own shadow picture as you cross. 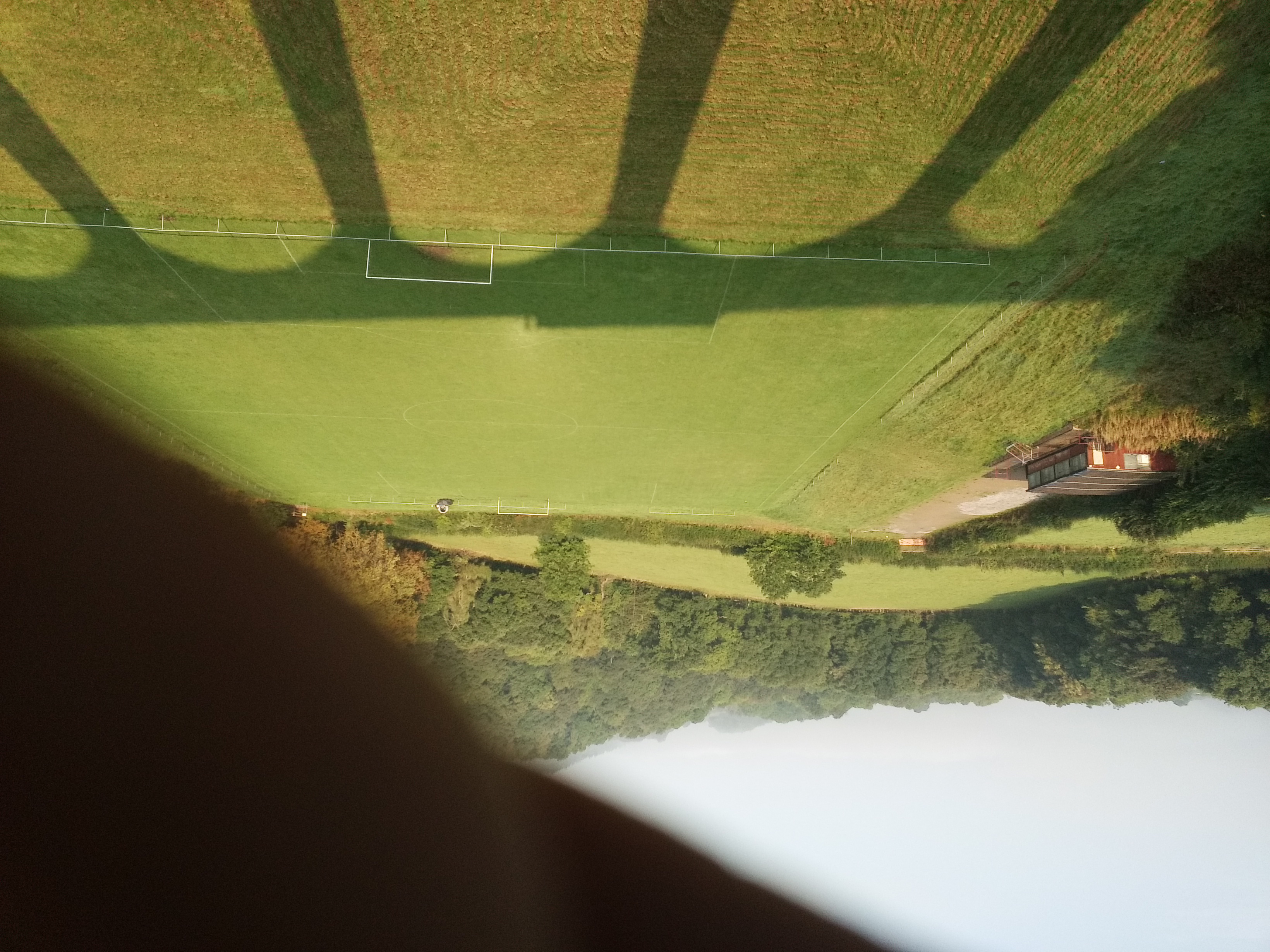 Yes I know it's upside down but I can't rotate it in this app!

Drama ensued when a German boater thought that Chirk tunnel was one boat each way in turn so met our flotilla of 4 part way. International diplomacy eventually prevailed and he reversed out of the tunnel, time to transit Chirk tunnel 45m!

So to the knack of these narrow tunnels and aqueducts, it seems that the best approach is to go at tick over and steer away from the towpath side, well that works for me any way.

So we arrived at New Marton locks and had already decided to overnight short of the lock. We learned that there was a queue in excess of 20 boats waiting to go down, a waiting time of over 4 hours. As we wait here now there is a growing number of boats around us that we suspect are all planning an early start tomorrow, so we're casting of at the crack of dawn tomorrow in stocking feet doing our best Elmer Fudd impression and keeping vewy vewy quiet not to wake anyone before we get to the lock!!!